Greg returned to hunt and vacation with Karoo Wild Safaris. This time, he planned to hunt a mountain reedbuck, black springbuck, impala and most importantly the gemsbuck which he missed out on last year. He shot with my 7x64 loaded with 160 grain... 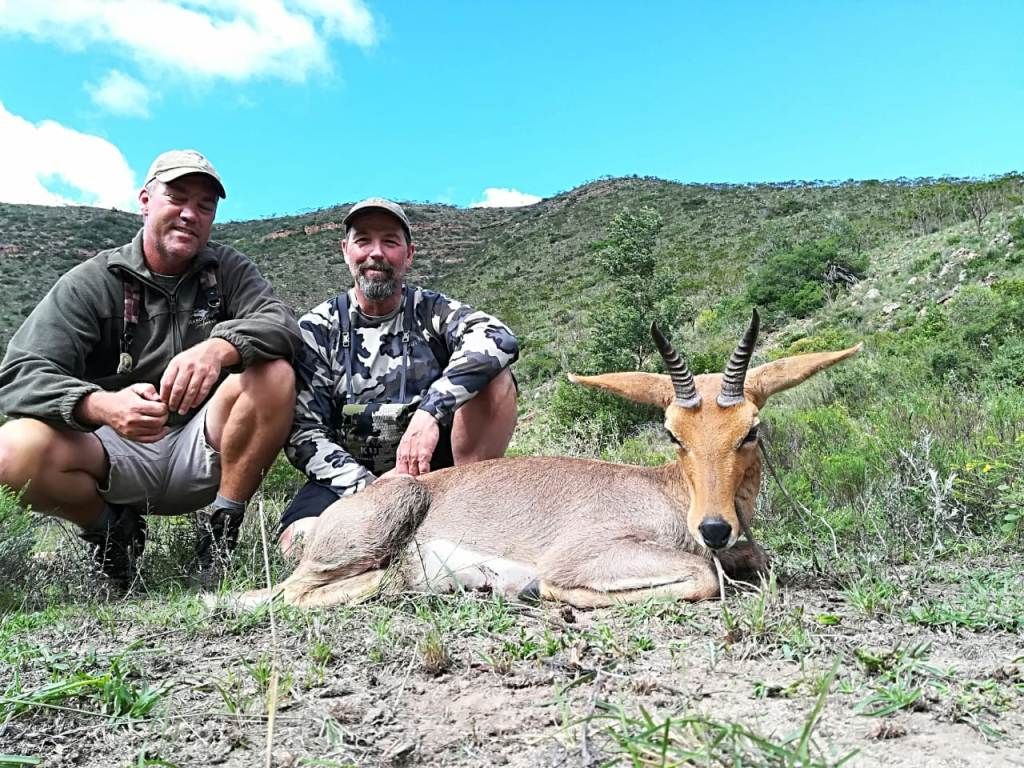 Early on the first morning we were searching the Winterhoek mountain range for mountain reedbuck. The fog blanketed the mountain range making spotting difficult but later it lifted revealing numerous pairs on klipspringer occupying the craggy peaks. We hiked down the range towards the nature reserve and saw several small herds of mountain reedbuck grazing on the river's edge. The stalk down the steep river bank was precarious but we were able to get past a small herd unseen heading slowly towards the old ran we spotted from above. He was in full rut sniffing and chasing the ewes around the water's edge. We inched within 150 yards and were able to set up and wait patiently for him to settle down. Greg's first shot hit a little far back but the ram lay down and we moved slower where Greg's second shot found the mark. He was an old ram with beautifully shaped horns.

We travelled north to a concession for a few days hunting there. The weather was beautifully calm and we had sightings of elephant, rhino and buffalo on the first morning. We were able to get close to a small herd of elephant and get some good photos. We lucked out the first morning and had a busted stalk on a herd of zebra high on the mountain slope. That afternoon we stalked in on some zebra. We made a slow stalk, careful to make every step as quite as possible. We waited patiently for the chosen stallion to move out of the brush. Greg's first shot hit but the zebra moved off. We waited for a few minutes before following the spoor. A hundred yards later we found blood which gradually increased in intensity. There was a crashing in the bush ahead and we know we were close. The zebra appeared struggling 30 yards ahead of us and Greg put it down with a well placed shot.

Early the next morning we were against a mountain slope trying to stalk in on a three gemsbuck we spotted earlier when we saw a loan gemsbuck grazing on the edge of the plains below us. We left Mitchell on some high ground to help guide us in on the gemsbuck's position. The bush was high along the edge of the plain and we knew it was going to be tough finding his exact location. Mitchell came on the radio warning us that we were close but still we couldn't pinpoint his position. We waited patiently prepared to let the moment unfold by itself. Slowly a horn appeared directly to our right and we realized that we were less than 100 yards away. The gemsbuck moved to walk across our field of view and we waited for him to turn away before setting Greg up for the shot. When he turned back he was quartering sharply towards us and he must have spotted something amiss beacuse he lifted his head ever so slightly. Greg fired and the gemsbuck took the hit, turning and running through the bush into the open plain. Mitchell came on the radio, saying that he was running away, then swaying and then he was down. We followed his track for a few hundred yards before finding him expired. What a beautiful gemsbuck and we were exeptionally happy with the stalk and trophy. We returned to Karoo Wild Lodge that evening.

The next day was the epitamy of hunting luck. We spotted a small herd of black springbuck rams in the morning and put in a short stalk. Greg's shot was perfect and the ram was dead on the spot. Early that afternoon, we put in another short stalk on a lone impala ram that ended in the same fashion.

We headed for the coast the next morning to shark cage dive in Mossel Bay. The sea was rougher than usual but after a short chum of the water a lone great white shark appeared. Later more sharks appeared around the boat and despite the rough seas, the shark viewing was good with sharks bumping the cage to get at a fish head pulled over the cage. Lindsay and the kids joined us in Plettenberg Bay that evening and we enjoyed dinner and drinks at The Deck overlooking Lookout Beach. Greg and I signed up for a fishing trip with Enrico's Fishing the next morning. We launched from the beach with the aid of a tractor and spend the next few hours pulling in hake and gurnard of the coast of the marine reserve surrounding Nature's Valley. The sea was still choppy but it was a superb morning. We braaied (barbecued) our catch that afternoon on our apartment balcony. Greg gave us a chef masterclass in making fish tacos and seviche. It was an chilled afternoon and a fitting finish to a very fine hunt and holiday with Greg.

Had a Awesome time again in your wonderful country. Thanx so much for showing me around and providing so much. Wishing you guys the best of hunts this season!