We were delighted to host George on his first hunt in the Eastern Cape. He's a hunting veteran with several trips to Limpopo and other African countries under his belt.... 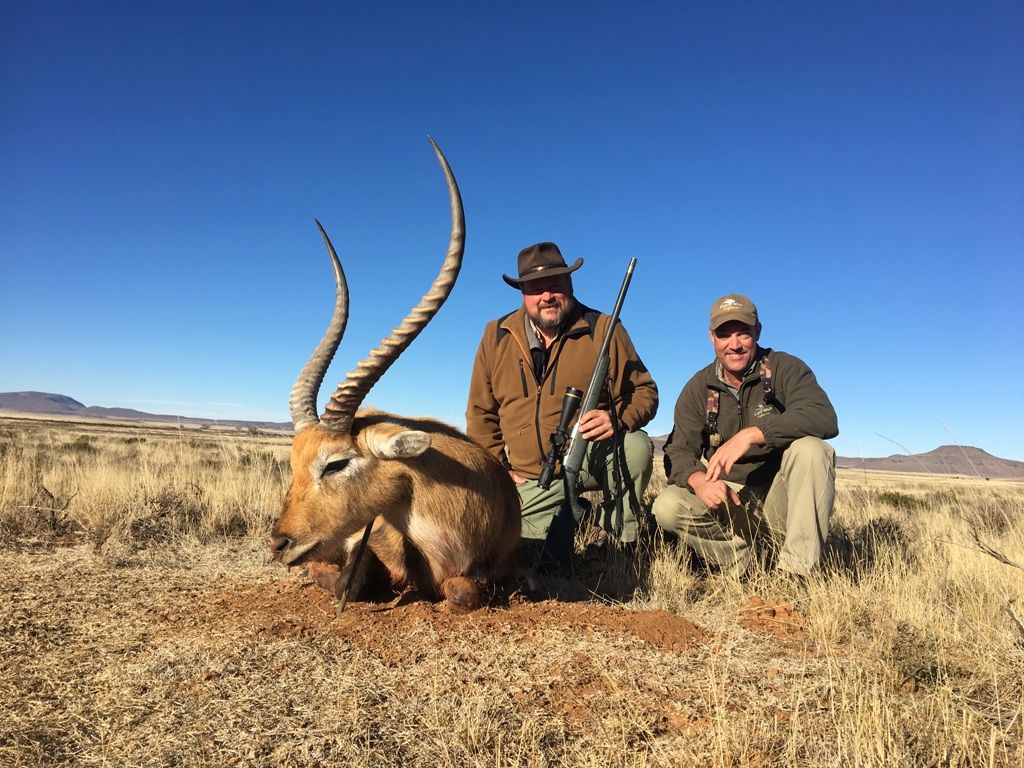 George brought his custom Christensen Arms 6.5 Creedmoor with him. Top of his list were several rarer species within the  tiny ten group of antelope and the three springbok colour variants. With its well documented accuracy, George had brought the perfect weapon for the hunt at hand.

The hunt began in an area north of Graaff Reinet with George taking an old white springbuck ram early in the morning. Two rams drifted into the area where George and I were waiting and the shot was dead true, stopping the ram in his tracks. Around  mid morning we were searching an area for mountain reedbuck when Nibbs and Mitchell spotted a herd of vaal rhebuck on a step above us. We identified the breeding ram as a good trophy but they were already moving casually up the slope and we decided to go around and attempt to approach from the the plateau above them. An hour later we were in a perfect position directly above them. George made another great shot, the vaal rhebuck ram making a desperate dash before expiring on the slope below. We couldn't believe our luck at getting a vaal rhebuck so early in the hunt. We weren't even sure if they occurred this low down and had planned to hunt one the following day at a higher altitude. It was a terrific day which just got better when we put in a short stalk on a copper springbuck. The tactic of approaching from above again worked well and we stalked to within a 140 yards of the ram before George set up to make another fine shot. After a barbecue that evening, we went on a night drive and George shot three porcupines that were feeding in a lucerne land.

Early that morning we went in search of some mountain reedbuck we had spotted the previous evening. It was a chilly morning and they were sunning themselves in the same area. George and I snuck in as close as we could and the christensen roared, the bullet finding it's mark once again. We were having terrific success on the hunt and opted to take the remainder of the day to explore and photograph this beautiful area. Nibbs showed us some of the historical and picturesque sites on the 50,000 acre property and we were able to take some stunning landscape photographs.

The next morning we headed a little further north to hunt red lechwe in the Oorlogspoort area. The area supports a large number of lechwe, steenbok and springbok. We passed on a few lechwe bulls early on before we spotted a big bull in the distance. There wasn't much in the way of cover but we used the undulating terrain to our advantage and George made a walking shot to stop the lechwe in his tracks. He was a fine bull with a terrific shape to his horns. George elected to hunt another copper springbuck and there were several in the area. We used an earthen dam wall as cover to sneak up on a group of bachelor rams. It was a long shot, 260 yards plus. George lay prone on the ground wall and made another fine shot to shoot a long horned, copper springbuck ram. The landowner, Willem, treated us to a viewing of his antique firearm collection. Several pieces dated back to the days of the Boer Republic. That evening we headed back to our lodge for the second leg of the hunt.

Top priority over the the next few days was a cape grysbuck. This elusive antelope grazes almost exclusively at night and we hunt them with a spotlight. Telling a ram from a ewe is tricky as they have dark stripes on the inside of their ears making a side view essential to telling them apart. It was a tricky first night out. We made an error in judgement and shot a one horned ram. Later on we saw several rams but they were surprisingly reluctant to offer us a shot. George had an instinctive shot at a ram fleeing for a clump of bushes. The shot missed. We shot a common duiker, crossing the road ahead of us. Satisfied the rifle still held it's zero, we continued on. We didn't connect with another grysbuck ram but vowed to return in a couple of nights to try again. During the course of the next couple of days, George shot a black springbuck and a steenbuck. We were out one night in search of a bat eared fox when Mitchell used a whistle to call in what we thought was a black backed jackal. The animal came bounding in. At 140 yards out, he stopped and George fired. Upon closer inspection, we found a caracal tom, an animal that we had planned to hunt with dogs later on in the hunt.

Not satisfied with the trophy quality of George's black springbuck, I decided we needed to hunt another. We used the wind to our advantage and snuck up on a small herd grazing on the edge of a large pan. We waited patiently for them to move out from behind some bush and George made a near 90 yard shot. That evening, we returned to search for cape grysbuck. Luck was on our side this time, George shooting a terrific 3" ram in the first hour of our hunt. Later on we got a cape bushbuck to go along with the bushbuck George had shot on a previous trip in Limpopo. The cape bushbuck is a lot darker than its northern cousin.

We travelled to the coast for two nights of hunting. Top of the list was an oribi. Possibly a blue duiker if time allowed. A storm rolled in shortly after our arrival and the wind was howling. We were specifically looking for an old oribi ram, surplus to the requirements of the area and we passed on several younger rams throughout the course of the first day. That evening, George and I enjoyed a meal at the Highlander pub in Port Alfred. We set out again after breakfast the next morning. It was raining constantly but we spotted several oribi groups. The wind was blowing and they were on edge. We got heartbreakingly close to taking a magnificent ram after a long stalk. He lay down behind a bush however and we couldn't be sure of hitting him in an area of his body that wouldn't destroy the hide. It was mid afternoon when we finally got off a shot at an old oribi ram. He was a beaut, an old warrior with lots of character to his face. Without a doubt, this was a tough hunt. Who would have thought the docile oribi would prove to be the toughest animal to hunt throughout the ten days.

Thank you to George for the memories. It was a pleasure hunting the Eastern Cape with you. What a fun hunt! We  look forward to welcoming you back next August for another memorable adventure.

Karoo Wild Safaris, a true gem. Simply put one of the bests hunts of any kind I ever been lucky enough to experience. This was my eighteenth African Safari and somewhere around my 75th guided hunt worldwide. I had a tall order for small unusual and not very glamorous animals in a quest to complete the tiny ten.

Victor and his staff made my Safari extraordinary. Victor worked hard to make the hunts successful and to secure permits for the odd animals I was after. When the dust settled, we had taken a bit over fifteen animals but more importantly gathered millions of unforgettable great memories.

The concessions we hunted were beautiful, large and had abundant and free ranging animals. The main lodge at Haaspoort Bushcamp is very nice as were all the places we stayed. The people of the Karoo are the real gem here though. Warm and welcoming just doesn’t seem complementary enough. When I first made contact with Victor I had no idea this safari would be a trip of a lifetime.

I want to also thank the folks on Victors reference list for putting concerns at ease and answering all my questions. You all were invaluable.

Finally, on a drive back to main camp on my second to last day I couldn’t help to think,”I can’t wait to come back to Karoo Wild Safaris and hunt with Victor, Nibbs and my good luck charm Mitchel”. Only on one other occasion have I felt that way at the end of a hunt, so those thoughts have not been routine for me.

Victor and Lindsay along their two precious children offer one of the most enjoyable hunting and touring operations in all of Africa, if not the world. Two weeks after being home we’ve already formalized plans to return next year. Yes it’s that good!!