We're currently hunting with the Burton family (Tim, Deb, Jordan and Brooke) and friend Colin Pietz from Wisconsin. PH Arnold. Klaasen and Jordan shot this cape kudu bull a couple of days ago. He measures L=56 3/4, R=55, Bases 9.5 per side... 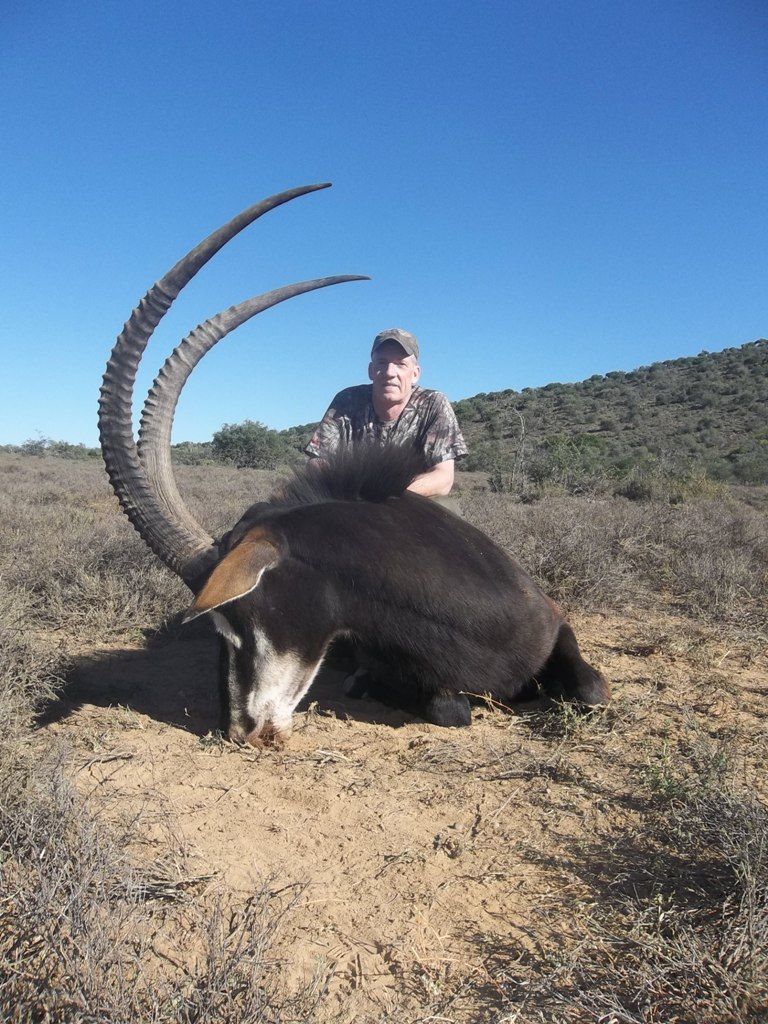 Jordan was looking for something completely different and he certainly got what he bargained for. Although far from a classic kudu bull, once officially measured he's expected to be near the top of the SCI book for Cape Kudu. Like Arnold so humbly says "even a blind chicken can pick up a piece of corn once in awhile". Well done to Jordan on an outstanding hunt and once in a lifetime trophy.

After 14 fruitless days in Zimbabwe last year, Colin and PH Craig got a fantastic Cape Buffalo after 4 days of hard hunting. He followed that up with a red lechwe and a kudu. Colin's luck has certainly changed on this trip.

Jordan's father Tim, hunted with Nibbs and they began their hunt with a great sable. During the course of the week Tim has hunted hard and taken an eland, springbuck, nyala and bushbuck. He shot a kudu in deepest darkest Africa and it took the whole force of the hunting team to recover it from where it lay precariously on a mountain.

Well done guys on a great hunt so far! It’s been a week filled with fun and lots of laughter. Last hunting day today and Colin got a great nyala and Tim a Waterbuck with a beautiful curving set of horns. Jordan, Brooke, Deb and Linday spent the day in Port Elizabeth at the beach shopping.

I can't write a message to you that is fully adequate to thank you, Lindsay and all of your great staff for making my safari with Karoo Wild Safaris such a wonderful trip.  I enjoyed every moment of the days I spent with you.  I really appreciate your organizational  skills and very personal and professional attention you applied to all of us.  We simply could not have had the great opportunities and results without your assistance . I have been on many very nice hunting and fishing trips all over the world.  This trip was simply the best.  What more can I say?

Finally getting that Cape Buffalo was a major goal of my life.  I can't tell you what that means to me.  The red lechwe and nyala are terrific trophies.  Tim and Jourdan did exceptionally well. I can't wait to see how that kudu measurement turns out.

Lindsay,  thank you for your many courtesies

I simply can't thank you and your whole crew enough for the experience of a lifetime.  Having the opportunity to hunt all around the world I have to admit that this was one of my favorite hunts.  Getting the chance to see my dear friend Colin finally get his cape buffalo, my son Jordan take a kudu of a lifetime, and to finally get my sable was truly special.  The reality is that those were only some of the special moments.  Getting to hunt with Nibbs as well as the sharing of stories and laughter by the fire with new friends, old friends, and family is simply awesome. We appreciate the effort you, your wife, and your entire staff made to make this a truly epic hunt.  We can't wait to hunt with you again in the future.