We hunted with Andrew and his 12 year old son, Alexander in the Graaff Reinet area. Andrew is originally from South Africa but now lives in the US. Alexander had shot before with a air rifle but had never hunted with a hunting rifle.... 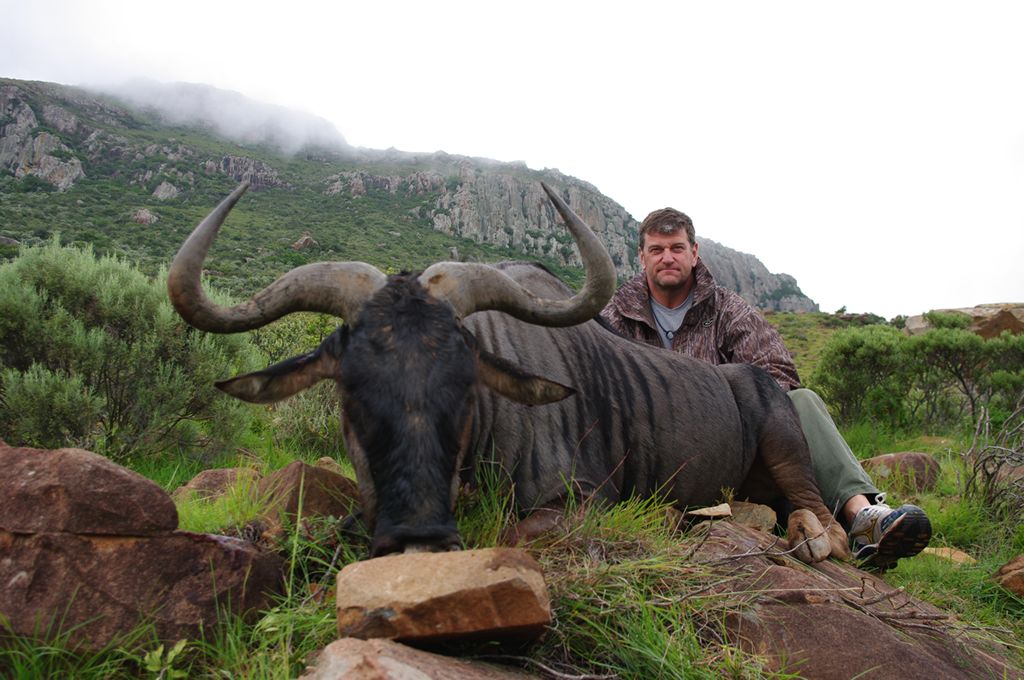 Andrew used my CZ 7x64 with 170 grain rounds. Alexander shot with my Brno .243 loaded with 100 grain rounds. We fitted a suppressor to the .243 to reduce the felt recoil even further.

After a short session on the shooting range the first morning, we drove a 4x4 track out the mountain in search of eland. At the peak of the mountain, we left the vehicle and glassed the grassy slopes below. Before long, we spotted a herd of seven large eland bulls. All of them were magnificent trophies but because of the open mountain slope it would take some hard work to get within shooting range. We waited for half an hour to ascertain which direction they were grazing before we used a rocky outcrop as cover between us to get below them. Using the terrain and the rocky outcrops that were dotted throughout the slope, Andrew and I crawled to within 200 yards of them. We waited for the chosen bull to turn broadside before Andrew fired. The shot hit the bull hard and he spun round. A second and third follow up shots brought the bull crashing to the ground. He was a big blue bull with a magnificent, wide set of horns. What a start to our hunt!

On the way back to the lodge for lunch, we spotted a blesbok ram standing on the edge of open plain close to an acacia thicket. Recognizing that the acacia thicket would give us some cover to stalk, Michael, Alexander and I set out. When we got within 100 yards,he was lying down and unaware of our presence. This was the perfect scenario for Alexander to hunt his first animal and we slowly set up the sticks. It took a long 5 minutes before the blesbok ram recognized the danger facing him. When he finally stood up, Alexander was ready and the first shot hit him squarely behind the shoulder. I told Alexander to shoot again for good measure and the second was a spinal shot which put him down. An overjoyed father soon joined us and we celebrated Alexander's first animal.

The sun set on an eventful first day and we were excited for what adventures the following day held.

At first light we headed for the plains looking for a herd of black wildebeest that we could stalk to within shooting distance for Alexander. We drove past a herd of eight cows and a dominant bull and then using a thin line of trees, we stalked slowly to within 100 yards of them. They sensed danger and were snorting incessantly, the dominant bull in front looking directly at us. His whole body contorted as he snorted and he seemed ready to flee at any second. We bided our time and waited for 20 minutes before he lost interest and turned broad side. We set the sticks up and Alexander obliged, the 100 grain round knocking the bull right down. I was amazed at this young kid's composure and patience. Hunting holds many valuable life lessons for the youth and being with Alexander and Andrew in the bush reminded me of this.

Given the right circumstances, we were confident that Alexander would be able to shoot a waterbuck with a .243. Those circumstances presented themselves at first light the next morning when we bumped into a large waterbuck bull at the river's edge. We drove some way past and then slowly stalked to within the bull's position. With the bull quartered towards us at 120 yards, Alexander slowly squeezed the trigger once again. The bull bucked the shot and ran off disappearing from view. We crossed the dry riverbed and found him dead 30 yards away. The round went diagonally in on the front shoulder hitting all the vitals on the way through to the opposite side. We later measured him at over 30 inches, a once in a life time trophy.

The last morning turned out to be the most successful with Andrew taking a huge blue wildebeest bull and Alexander shooting two impala rams. The first impala ram was wounded on the first shot and we followed the blood spoor for some distance before getting a second shot in. The second ram ran off with a good lung shot but expired 100 yards away. Both hunts were invaluable learning experiences for a young hunter. To keep your emotions in control when you're convinced you've lost something, not give up, persevere and then to succeed at the end.

Andrew and Alexander shared some terrific father and son moments. To give your son the gift of learning from nature is one of the greatest experiences you can ever offer him. Nature has it's own rhymn and for four days we enjoyed this rhymn forgetting about measured time and the pressures of modern life.

Thank you my new friends, I hope to meet you again soon in the place we share a common love for, the Karoo.