Buddy and Lori return to Karoo Wild for their honeymoon

Buddy and Lori, returned to South Africa for their second trip and hunt with us. This time, they were on their honeymoon and after a 7 day hunt with us had planned a shark cage dive in Mossel Bay and some time in Betty's Bay... 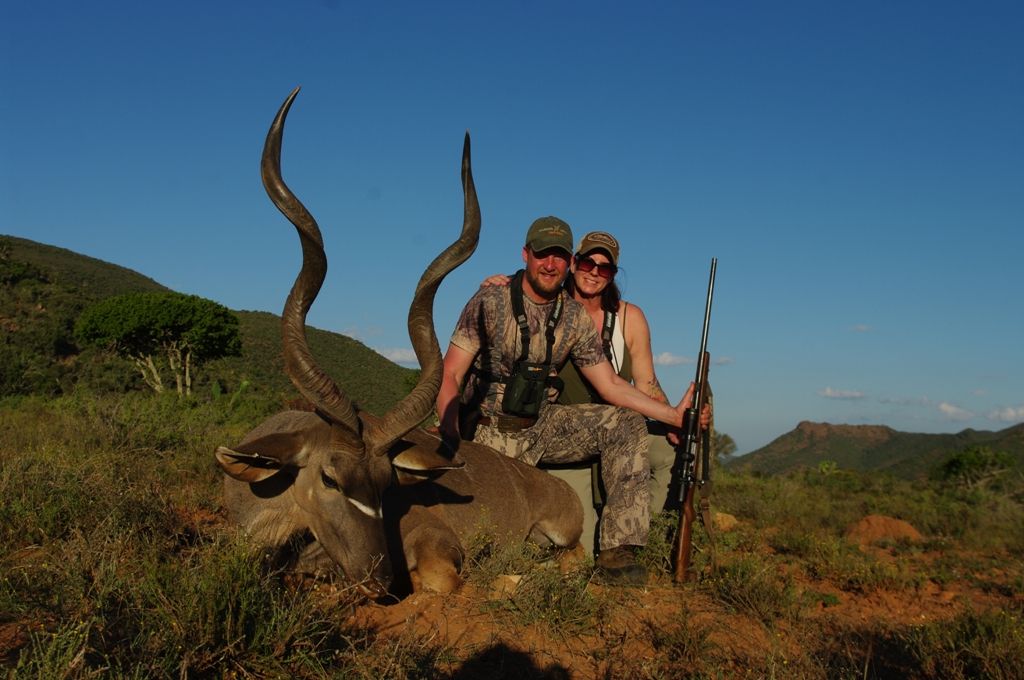 After Betty's they planned on driving further down the coast to spend some time in Cape Town, visiting the winelands at Franschoek and over-nighting in Oudtshoorn on their return to Port Elizabeth.

Lindsay had decorated the "honeymoon suite" with flowers, chocolates and an ice bucket of champagne and that evening we celebrated their marriage with "springbokkies" and a meal of lamb shanks and malva pudding.

Buddy shot with my Sako .270. On his wish list was a second kudu to go with the first he'd shot in 2016, a black wildebeest, waterbuck and a bushbuck. Lori was keen on hunting a cull red hartebeest. The first morning was spent hiking through the valley floors looking for kudu. We came across several small herds and a few bulls, none however of the size and age we were after. That afternoon we were out looking for kudu again when we spotted 4 big kudu descending a mountain. The bush was thick and they had several routes that they could take once they reached the valley floor. Based on the way they were moving, we guessed their route and hurried to get into position. We guessed well and the first bull, an exceptionally wide bull moved over the a "koppie" directly down towards us. He was similar in shape to the kudu Buddy had shot on his last trip and we preferred the second bull which had tall horns, pointing forwards. At 140 yards, they were still walking briskly towards us when the second bull paused and Buddy fired. He hit the ground hard and expired. What a moment, it all happened so quickly. Cape kudu hunting has to be one of the most exciting hunts in the world!

The next day we headed for a couple of days hunting at a concession directly north of us. We spotted two waterbuck move into some thick bush below a mountain and we tried to stalk them but the wind was swirling and they got our scent and ran down into the even thicker acacia thicket below. Later that morning we bumped into a herd of black wildebeest in an open plain. There was no cover, only undulations in the terrain that we could use to approach unseen. At 280 yards out, we took a chance and walked diagonally closer but not directly towards them. The dominant bull stood up and snorted but by now we were almost within range. At 220 yards, we set the sticks up quickly and Buddy made a terrific shot to put the big bull down.

That afternoon, we made a failed stalk on a huge waterbuck bull. There were too many animals grazing on the grassy plain and we found it difficult moving past them without them giving our position away.

We returned to the same spot the next morning and the same waterbuck bull with his herd of cows was on the edge of the plain grazing between some bush. A herd of 20 elephant were grazing directly between us and we waited patiently for an hour in the hope that they would move off so we could get closer. Eventually the elephant moved a little way off and we moved closer to our target. The big bull was in plain sight now and Buddy took a shot. The bullet hit but he kept moving, pausing to rest on the edge of a bushline. It was a catch 22 situation, take the long shot and miss and he was in the thick bush and possibly gone forever or move closer for an easier shot and take the same risk. Buddy stayed with Mitchell, while I moved closer with Mike with my .375. The elephant were still in the vicinity and we had to be careful, teenage elephant bulls in musth are very temperamental and look for trouble. We skirted around them and got to within 100 yards from the waterbuck bull which was fully hidden behind a acacia bush, just his horns showing. I fought the overwhelming urge to gamble and put a 300 grain bullet throught the bush and end this conundrum we found ourselves in. The waterbuck was off again, this time in seemingly impenetrable bush. We found blood and followed patiently, losing the blood ever so often to take it up again. The blood trail was moving directly towards a mountain. I radioed Buddy and Mitchell to scramble ahead of us and find some height in order to spot the waterbuck in the thick bush. An hour later, Mike and I lost the blood trail. Inexplicably it had dried up. We were still wandering around looking for blood droplets when Lori yelled that she had seen the waterbuck below her. Buddy and Mitchell must have heard her because a split second later, the .270 sounded a sharp shot. We found him near where we'd lost the blood. Buddy's first shot had hit low on the front leg, the second was through the lungs. He was a fantastic bull! It was a moment of terrific fortune made possible by an exceptionally fit hunter and his observant wife...

Buddy wanted to hunt a warthog with his bow and that afternoon we hiked from the cottage in search of a suitable prey. We moved round a herd of white rhino and later spotted a warthog tail flicking in some thick acacia bush ahead. Slowly we moved forward. We were 50 yards out when my heart jumped. Lying down directly behind the grazing warthog was a cape buffalo bull. His eyes were closed and he appeared to be sleeping. This particular bull had a reputation and we decided to abort the stalk. Later we stalked up on a warthog boar in a riverbed below. We were crawling 40 yards from him when he turned and walked up a path directly towards up. Buddy sat up on his haunches, aimed and shot. It was a fast opportunity and the arrow flew inches past his head, the warthog crashing the the brush as he fled the scene. We returned to our lodge.

Lori hunted her cull red hartebeest the next day. Lori's first shot was good and the old red hartebeest went down. Well done Lori! Later that afternoon, we put in a brief stalk on a herd of black springbuck and waited for them to move into the open. The lead one was a ram and at 120 yards, Buddy's shot was perfect and the ram made the 40 yard dash before expiring.

The bushbuck proved tricky. The weather had turned foul and was cold and blowing a gale, not great for bushbuck who only come into the open when the sun is shining. We had a stalk on a good ram who was feeding in a sheltered corner of a field. The swirling wind however gave him our scent and he retreated to the safety of the thicket. Early afternoon of the following day, Mitchell spotted a big ram moving across an open valley. There was no chance of getting downwind of him but nevertheless we decided to make an attempt to stalk him. We were 240 yards out when our cover ran out and there was no possibility of getting closer. The wind was pushing directly towards him as well. Buddy set up in a sitting position and fired as he came out from behind a bush. The shot flew high and the ram fled uphill. It was a difficult shot but one worth taking. Bushbuck will be top of the list next time!

We said goodbye to our friends the next day. It was another memorable and fun hunt!

Today we left these amazing people and this beautiful place nestled in the heart of the Karoo. The first week of our honeymoon has been nothing less then perfect. Victor and Lindsay, thank you so very much, once again you exceeded our expectations, we promise we will return to track down the elusive bush buck and actually use that bow. Enjoy Addo and thank you again.