We've welcomed many hunters from Turkey over the past decade so it was a pleasure that Engin chose to hunt with us on his second South African plains game safari. He had a specific wishlist that he formulated whilst on safari in South Africa in 2011 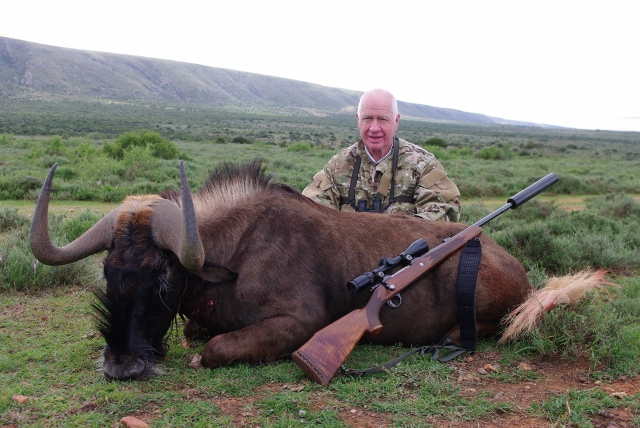 We started our Red Hartebeest hunt at Boschfontein and followed a herd for the morning without ever getting a good opportunity. We resumed our search for a good trophy at Haaspoort and Engin successfully took a nice bull with a heart shot at 130 yards.

The next morning we set off in search of a Black Wildebeest. Wildebeest hunts are always filled with nervous anticipation. They're notoriously tough animals to put down even with a seemingly perfect shot. We approached an exceptional bull at 150 yards and Engin made a shot that seemed perfect at first! The bull bucked and set off in search of the thich vegetation at the base of a nearby mountain. We pursued and picked up the blood trail, tracking for a mile before the bull joined another herd. We were able to identify him and put him down.

That afternoon we travelled to one of our conservancies in the Camdeboo Mountains. Crater Valley is always a special place to hunt, one of the most scenic wildlife areas in Africa. The next morning we followed the contours of a large mountain in search of a Waterbuck bull. We passed up on a few lone bulls before our patience was rewarded when two Waterbuck bulls emerged from the thicket below. Engin chose the larger and two shots later he had a nice Waterbuck bull.

We spent that afternoon following large herds of eland but were unsuccessful in getting into a good position. A White Rhinoceros bull blocked the road back to the lodge. We decided to err on the side of caution and took a detour!

The next morning we got ourselves into a good position above a herd of eland grazing up the crater-like valley. We identified the largest bull in a herd of 144 Eland. Yes, we counted them all! The shot hit but the bull turned and followed the herd out of sight. We tracked the blood spoor until midday but it dried up. Forlorn, we decided to move around the large valley by vehicle looking within each herd for our bull. Three herds and a few individuals animals later we were able to find our herd at the opposite end of the valley. We stalked closer and our patience was finally rewarded when we spotted our bull and at a range of 300 yards were able to drop him amongst a large herd of the largest antelope on herd. It was humbling to even be in the presence of these large but incredibly graceful antelope.

The next day, Engin took a gemsbok bull grazing at a range of 120 yard.. He ran a hundred yards with a lung shot but soon expired. Later that day, I shot a black backed jackal running away from us along a path. Our 3 day hunt at Asante Sana came to an end to soon but we resumed hunting the next morning at Haaspoort where Engin took a good Grey Duiker at short range.

We bid farewell to Engin and feel privileged to be a part of his African safari. We hope to welcome him back to South Africa in the future.