Gordon and Denis hunted with us on a 10 day hunt. It was Gordon's third time hunting in South Africa and has hunted in Africa many times. Having hunted many of Africa's animals including four of the big five we were honoured that Gordon chose to... 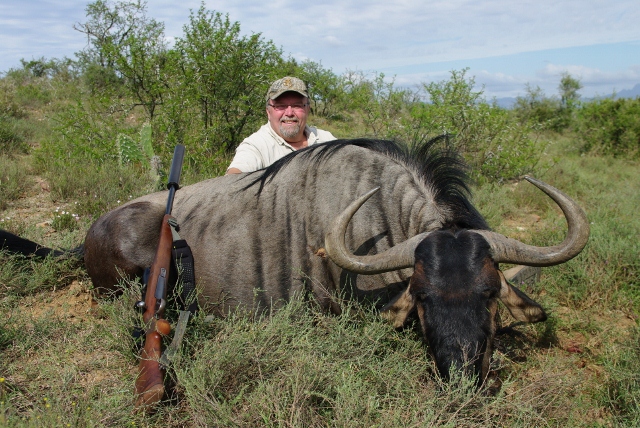 Having just flown in from Bulawayo on a successful but energy sapping elephant hunt, Gordon and Denis were physically a little tired but dead keen to hit the ground running and hunt our area. Their positive attitude and keenness to learn and experience everything about South Africa was refreshing. Early the next morning Denis took an Impala ram with a lung shot. It ran with the herd awhile before disappearing in a thicket. It had us fooled for awhile as we followed the herd trying to identify it. Unsuccessful, we returned and tracked the blood spoor to where Denis put it down with a neck shot.

On the trail of a large Red Hartebeest, we found ourself below an exceptional Klipspringer ram on the cliffs above and Gordon took it with a frontal chest. A magnificent karoo trophy!

Later that day we took a steenbok and a common duiker. An eventful day...

The next morning we set out in search of a Black Wildebeest and indentified the dominant bull in a large herd. Gordon downed it with a lung shot. Notoriously tough, anytime a wildebeest is taken with one shot it has been a good hunt! We took photos, loaded the large bull and went in search of a Blue Wildebeest. We spotted a small group grazing below a large mountain and began our stalk. We stalked for awhile before the bull faced us offering us a difficult but possible shot. Gordon hit him just back of the lungs and he took off for the bush above. Myself and the trackers set off in pursuit but the bull turned in the bush and almost ran us over before making straight for where Gordon had positioned himself above a stream. The bull now running at full tilt, Gordon downed him with a shot to the shoulder. Another good wildebeest trophy. Later that day, Denis made a 200 metre shot at an exceptional Cape Kudu and downed him with a second shot. A truly majestic bull with wide horns. Our area boasts the highest density of kudu in the world and this trophy fully represents the best of our area! Denis bagged a gem of a kudu.

Early the next morning we set off for Crater Valley, one of our conservancies in the Camdeboo Mountains. Upon arrival we set off in search of Gemsbok. Unsuccessful, we made our way to an area where Red Lechwe are known to frequent. Gordon had initially listed Red lechwe as his most sought after animal on this trip so is was important to find a good trophy. We weren't disappointed when we stalked upon a large herd grazing on the edge of a small swamp. There were several good rams, we identified the best and tried unsuccessfully to manouvere into a good position. They kept moving and in the spirit of hunting an animal known for its love for water we were soon knee deep in water. Despite losing half a boot to the thick mud, Gordon, myself and the tracker kept our sense of humour intact and soldiered on in pursuit. Our resilience was rewarded when we got an opportunity and Gordon put in a good shot on a 29" ram!

That afternoon we returned to find three white rhino grazing on the cricket oval in front of our lodge. We bid farewell to Denis the next morning. It was a pleasure meeting and hunting with Denis and hope to welcome him back to South Africa in the future. Gordon and I set off in search of warthog. We stalked up on a nice boar grazing on a small plateau and Gordon put in a good neck shot. Later that day, Gordon took a male ostrich and a nice Red Hartebeest bull.

We returned to Haaspoort that evening and the next morning we set off in search off springbok. We got in close to a large herd with several good rams. Gordon put in a lung shot to take a good springbok trophy.

The next day we decided to visit the Addo Elephant Park for some game viewing. We enjoyed the day viewing elephant, warthog and other antelope at close proximity.

The next day "one-shot" Gordon's good markmanship continued as he took a good blesbok ram. A nice ram with translucent-like yellowing of the horns, a sign of ageing in blesbok rams. Later that day, he took a kudu bull walking in a thickly wooded riverbed with a frontal shot. The kudu having fallen in an awkward place, we finally had an opportunity to test our newly developed "kudu carrier". We developed an implement that works off our tractors hydraulics allowing us to manouvere the tractor and load kudu in places a normal 4X4 pick-up wouldn't be able to get to.

We bid farewell to Gordon after a morning spent curio shopping in Port Elizabeth. We thoroughly enjoyed our time spent with Gordon and enjoyed his adventurous spirit and good chats around the dinner table. We truly feel priviledged to be in an industry that allows one the opportunity to meet and make such good friends with people who share a passion and love of the wild and unknown.