The Oplotnik family from Oklahoma, USA, joined us on an action packed 7 day hunt and adrenalin filled vacation. The trip was a surprise 50th birthday present to Greg from his family... 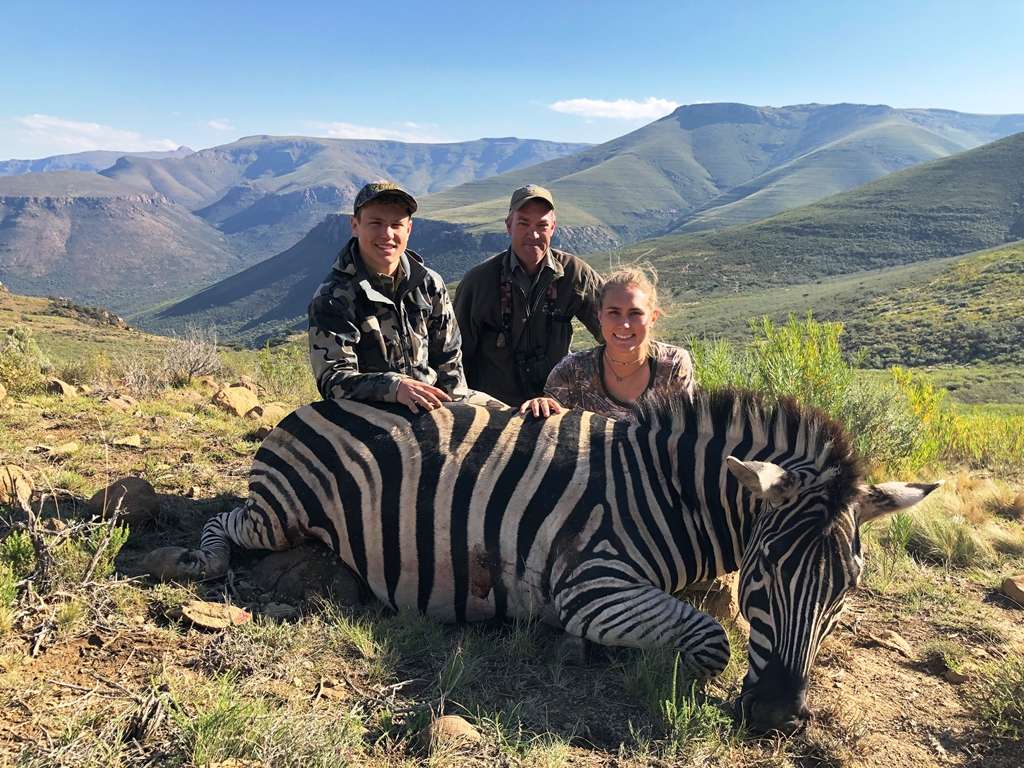 Greg, Darci, daughter Jaci and son Jackson all hunted throughout their stay and Darci and the kids also took part in the tourist activities our area has to offer. The hunt started with a bang, Greg and I getting a nyala bull within moments of setting out on the first afternoon. It was a hunting gift we accepted graciously.

Early the next morning Darci, Jaci and Nibbs as PH went in search of impala. Darci was able to make a terrific shot to get her first animal, a beautiful impala ram. Greg, Jackson and I hunted together that morning and came across a magnificent sable bull. He was lying down next to a wash at the base of a hill and we put in a stalk. Greg's first shot was a hit. The bull the bull shook it iff and dashed off at high speed. Greg's subsequent shots were good and he'd downed a beautiful sable, one of his most desired trophies.

The girls and I visited Addo Elephant National Park that morning and had good sightings of two young male lions unsuccessfully trying to dig a warthog out of his hole. We also saw several large elephant herds, buffalo and plains game. After lunch, we drove up the Zuurberg pass to Addo Elephant Back Riding where the girls had the opportunity to ride, walk and feed elephants. The guys went buffalo hunting with Nibbs and another PH. Greg had graciously offered his son the opportunity to hunt his buffalo. We'd previously got Jackson comfortable shooting the larger caliber 375 Ruger and we were confident he'd shoot it accurately. Cautiously they followed a group of dugga boys into a dry riverbed. Despite the heavy cover they were able to get a shot some time later. The bull took a few more shoots before going down but Jackson got his cape buffalo.

We travelled  north to a concession for a few days. Greg, Darci and Nibbs were soon onto a blue wildebeest bull who was hanging out in a dry riverbed in the valley. They bumped him and he made the fatal mistake of pausing long enough in the riverbed for Greg to get a shot off with the 375. Jaci, Jackson and I hunted together and we hiked the green edges of the riverbed in search of lechwe and waterbuck. We soon spotted a  herd of lechwe cows with several bulls fighting for their attention on the perephery of the herd. They were distracted and it was relatievly easy making up the 100 yards needed to get within shooting distance for Jaci. Jaci's first shot flew high but the bull darted left scaring the remaining bulls who promptly appeared in our field of view. Jaci made no mistake this time and her second shot downed a gorgeous red lechwe bull. Late that same afternoon we were hiking along a mountain slope where waterbuck are known to graze down into the bush below. We got a brief glimpse of the tops of a waterbuck's horns in the bush 80 yards ahead and we ducked down waiting for him to appear. However he stayed on the opposite side of the narrow line of bush extending from the mountain slope to the wooded valley below. We slowly walked adjacent to him hoping to get a shot. A short while later we saw a herd of waterbuck female above the bush line. Knowing that he would most likely try and join the females, we waited patiently for him to climb the slope to join the cows. He began climbing the slope and I quickly got Jaci into position but by some sixth sense the bull paused and turned sensing danger. Only a small portion of his body was above the bushline and Jaci took the small window of opportunity, her bullet hitting his shoulder two thirds of the way up. He disappeared out of our field of view. We found his blood trail and followed him for a hundred yards before finding him. I was super impressed with Jaci's shooting and composure. Although only a 100 yard shot, it was a dicey shooting situation. We returned to the lodge and recounted our hunting stories around the campfire that evening. The white rhino must've been particularly interested in what we had to say to because at one point in the evening I counted four of them grazing around the lodge.

At first light the next day we decided to drive out the side of the crater-like valley to search for burchells zebra on the mountain plateau above. Around mid morning we saw a small herd of zebra grazing on a grassy plain 800 yards below us. There was a large herd of twenty waterbuck between us and the zebra, a little to the left. With no cover to work with and exposed on the slope above the zebra, we know there was almost no chance of getting within shooting range unseen. Yet we decided to try our luck. Foot by foot Jaci and I moved down the slope. A few feet forward and we'd pause and check that none of the waterbuck were looking at us above them. Forty minuted later we were within 230 yards of the zebra and I believed our luck was exhausted. One alert waterbuck had noticed something amiss and he was periodically staring our way trying to identify our shape against the mountain slope. We set Jaci up for a comfortable sitting shot on the 45 degree slope. We identified the lead stallion as the oldest of the four stallions. The shot echoed loudly in the mountains and the zebra stumbled. His fellow stallions bolted to the edge of the plain and disappeared over the edge on route to the valley several thousand feet below. Luckily the wounded stallion was hurt enough to lose sight of his companions and he was still trying to establish what had happened and which direction they had disappeared too. Afraid now that a hasty shot would send him to the edge of the plain and never to be seen again I told Jaci to hold off on her shot. He stumbled around and some moments later went to lie down, facing away from us. We moved slowly closer, aware that sudden movements could send the wounded stallion over the edge. Within 150 yards now, we set Jaci up. The shot hit hard and the stallion stood up and fell again. A third and fourth shot later and he was down for good. What a fantastic stalk!

Greg and Nibbs hunted a  eland bull later that morning and we returned to Karoo Wild lodge that afternoon.

Darci, Jaci and Jackson had decided to travel to Plettenberg Bay to bungee jump and shark cage dive. At 710 feet, Bloukrans is the highest commercial bungee jump in the world. There had been some light hearted banter throughout the week about who would be brave enough to fling themselves off a bridge. Jackson had stated that if Jaci jumped, he would jump too. Greg and I decided to hunt kudu for the two days while the others were at the coast. We were taking it easy that morning and I may even have mentioned to Greg that we're normally more successful in hunting big kudu bulls in the afternoon when we spotted a herd of kudu cows in the distance. We watched them through our binoculars for a bit and as we moved off Siya stated that he'd seen a large bull momentarily. I wasn't convinced as I'd only seen a smaller bull but decided to trust him and we drove further down and hiked along a ridge to get closer to the herd. We moved slowly to within 200 yards from the cows, slightly above them. No bull. We waited for a half hour and I decided to move a little to my left to improve my field of view. I spotted the bull moving towards the cows and I motioned Greg to come closer. The bull moved behind some trees and we set the shooting sticks up. When he emerged he leaned upwards to browse on some higher branches. Greg fired and the bull disappeared from view. We heard a crash as he hit the undergrowth and dust covered the air as he thrashed about for awhile. He was a magnificent kudu bull. The kudu was to be the last animal of the hunt. A fitting climax to an unbelievable hunt and adventure. We returned to the lodge for lunch and watched video clips sent to us of Jaci and Jackson bungee jumping at Bloukrans.

They dined at the Lookout Deck on the beach that evening, went on a shark cage diving expedition the next morning and returned to the lodge that afternoon. It was a superb birthday celebration for a lovely family with an adventurous spirit. They loved every minute of their African experience. Hope to welcome you back to South Africa again soon.