First Hunt of the 2016 season begins with a bang

We were super excited to welcome Buddy and Lori from Minnesota to the Karoo. In terms of geography and climate the Karoo and Minnesota are poles apart but we soon discovered that we share a very similar culture and sense of humour. 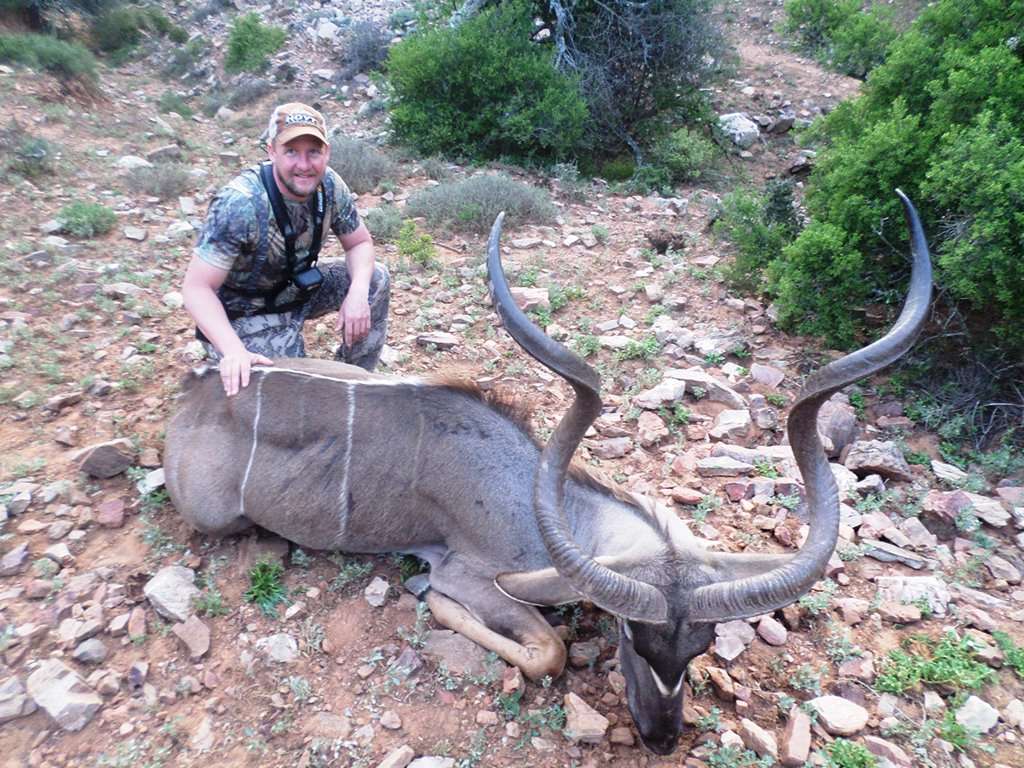 After a light snack we were soon onto the range where Buddy shot well with my .270 Sako, loaded with 130 grain Pro-Am rounds. Unsurprisingly, Lori also shot exceptionally well. I'm not surprised anymore (a little afraid maybe) by the a woman's ability to shoulder a rifle and with calculated precison, zero prior practice and zero emotion send a bullet exactly where they intend it to go. Buddy had brought his compund bow along with the hope of bagging one of the species on his wishlist with it; kudu, impala, gemsbok and wildebeest. We went on a drive that afternoon but light was fading fast.

We set out early but it wasn't until much later that morning that we were able to deftly manouvere into a position below a bachelor herd of impala. We were set up behind some acacias looking up at impala rams grazing on a hill side. Buddy and I quietly discussed decided which one to take and he soon fired. The shot hit a little far back but a follow up shot soon put the ram down. Buddy had taken a beauty and we were all grins. Back to the lodge for lunch and a short rest.

Later that afternoon we were in search of kudu when we spotted a large herd of blue wilebeest drinking at a waterhole. We recognized an opportunity for Buddy to use his bow and we lay in wait at the thick bush at the edge of the waterhole. Four bulls peeled off from the herd and entered the bush 100 yards to the east. We left Lori and the trackers at the waterhole and Buddy and I followed. With thick bush as cover and a brisk wind blowing in our faces we knew we'd get close if we could stay with them. We remained parallel to them as they moved through the bush, closing the gap ever so slightly whenever we had sufficient cover. When they slowed we moved ahead of the herd and got within 50 yards of the lead bull. We were so close we could smell them now and it took an infinite amount of self-control to move the last 10 yards. Buddy notched an arrow and had to make an awkward shot in the wind which was blowing gale force now. In our excitement we hadn't considered the effect of the wind on Buddy being able to stand steady upright and fire and the arrow flew high and left. We left empty handed but it was a thrilling stalk and effort in patience and self-control.

The next morning were went in search of kudu again. We spotted some big bulls early on in the morning. From a long way off we tried to move closer but we were unable to keep up with them as they moved from the plains gracefully into the impenetrable bush to disappear altogether. Using the bush as cover we hiked along the bush line hoping to sneak up on some bulls returning from their nighly escapades on the plains. We were out of luck and just as were were about to radio Mitchell to fetch us in the vehicle I spotted 3 big bulls in thick bush ahead of us. Using a large white tree as a marker we snuck up on their position. We were closing in on them when we walked into some waterbuck who spooked the kudu and ruined our stalk. Later that afternoon we hiked up a valley and waited patiently on the east facing slope for kudu to emerge and make their way down the sunnier west slope to the acacia thickets below. As the light faded we saw numerous kudu emerge to begin their late afternoon feed. A large bull appeared at the highest point of the opposite slope and he moved diagonally down the slope closer towards us. As he got closer it became increasingly apparent how wide his horns were and what a good trophy he was. When he was within range, Buddy readied himself and fired. The bull stumbled and rolled down the slope where thankfully a "spekboom" thicket finally put a stop to the tumbling. A very impressive first kudu bull for 2016! We radioed Mitchell and we all helped load the kudu.

Early the next morning we set out in search of gemsbok. After a failed stalk we had to put in the hard yards and it was late morning before Buddy finally got an opportunity to have a shot at a gemsbok bull. At 230 yards the first shot was perfect but he followed it up with a second one for good measure. We'd worked hard for this trophy and we were excited to get the gemsbok we were after.

The next day was spent touring the Addo Elephant Park where we had good sightings of elephant, buffalo, zebra, kudu, warthog and other plains game. We had lunch at the park restaurant and stopped in at Daniel Wild Cat world where Buddy and Lori did a guided tour of the centre and had close encounters with cheetah, leopard, serval and caracal.

The next morning we tried to sneak up on a large herd of blue wildebeest with the bow. We used the sparse cover that we had too good effect but it eventually gave way to open plains. We traded the bow for the .270 and we were able to move in on a blue wildebeest bull that was on the fringe of the herd. Buddy waited patiently for the perfect side on shot and the bull disappeared from view. We found him expired 100 yards away. A great shot on a very tough animal to put down. That afternoon it was Lori's turn with the rifle. She'd decided she'd like to hunt a cull blesbok or red hartebeest. We deftly used a dry riverbed as cover to sneak up on a large herd of hartebeest but the light was fading fast and we opted for an easier opportunity for Lori to hunt her first antelope.

Lori had a good opportunity the next morning as a herd of blesbok crossed the plain ahead of us. I pointed out an old ewe at the back of the herd. The dull thud was heard which confirmed Lori had made a reasonably good hit. To our dismay the old ewe managed to keep up with the herd. We followed their spoor for awhile and were soon able to cut them off and make a second shot to put her down. Well done Lori! She'd hunted her first animal with us and we felt tremendously honoured to be part of this experience.

It was the final day of Buddy and Lori's stay and we were determined to make the most of it. Buddy wanted to take a cull kudu and within 10 minutes of leaving camp we had a young kudu bull down. It was a tricky shot and situation and Buddy made it look easy. The kudu was high up a mountain slope and we enlisted some extra help to recover the animal. We travelled around the mountain in search of a cape springbok Buddy had decided to add to his list. The springbok remained in the plains and made stalking them near impossible. Later however they moved into a position where we were able to use a blind spot and the cover of a single "Koenieboom" tree to get within range of them. We set up the sticks alongside the tree and waited for what seemed like an eternity for our chosen ram to move into our field of view. The .270 barked for the last time on this hunt and Buddy had taken an animal synonomous with the plains of the karoo.

The next day Buddy and Lori rented a car and drove up the coast to Plettenberg Bay for a few days of sight-seeing. We had fun times hunting and laughs around the campfire and we were sad to bid farewell to two special people. Hope to see you in Africa again soon!