We’re hunting with Tim and Teri from Louisianna, US. They currently live in Nigeria and booked a 10 day plains game hunt with us. Tim and I discussed his wish list prior to him booking and the idea was that he would book two hunts across a 10 month.. 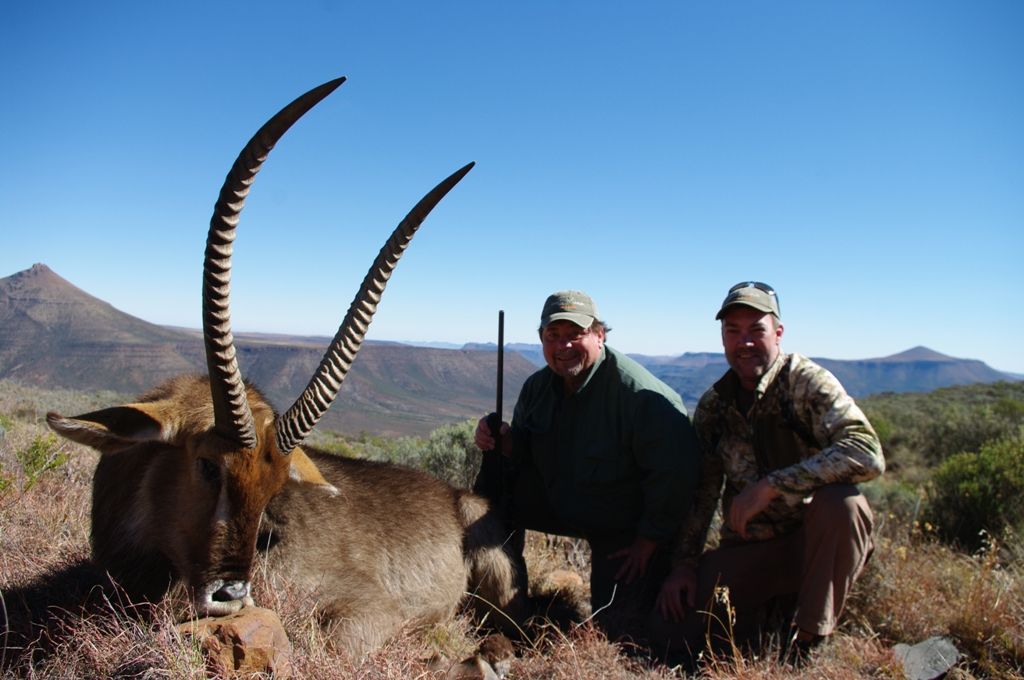 That would enable him to get excellent trophies and have a relaxing hunt spread over two years. On his initial list is eland, kudu, gemsbok, nyala, sable, red lechwe, impala, blue wildebeest, waterbuck and red hartebeest.

Whilst Teri and Lindsay took one of their soon to be regular nature walks, Tim, Mitchell and I set off in search of lechwe at the foothills of the Winterhoek mountains. Got this beautiful lechwe bull after a long stalk. Later that afternoon we connected with a large group of bachelor impala rams. Snuck up to within 100 yards. Tim made an excellent frontal shot to down a big impala ram.

Sable day! We hunted in open karoo area and we soon spotted a sable bull walking diagonally across an acacia thicket. Leaving Mitchell at the truck, we began a precarious stalk. Tim’s first shot missed but the four subsequent shots put the sable bull down. Sable are tough animals! All four shots grouped just a little back from the shoulder…

We looked for a big kudu that afternoon. No luck.

Looking for an eland today. Gave Tim the 101 on eland shot placement. Glassed through a herd of ten eland but no big bulls. Spotted two lone blue bulls moving over a ridge. Walked round the ridge and stayed with them as they browsed along the slope. Struggled to get within comfortable shooting range. Eventually they slowed when they joined a herd of females. 230 yards out, Tim put the GS Custom exactly where you’re supposed to and the bull ran 70 yards before toppling over. Bullet exited through both lungs. A world class eland bull and a great hunt!

We travelled north to hunt a concession for the next 3 days. A massive cold front hit the Eastern Cape and it was snowing in the mountains with gale force winds when we arrived. Set out and later that morning spotted a gemsbok herd taking shelter against the wind. Sneaked closer and had to hold still as a herd of blue wildebeest moved between us and the gemsbok. Waited for a half hour before we began the stalk again. Got to within 260 yards before we ran out of cover. Stayed low and tried to get even closer. The gemsbok spotted us and began to run. The lead one was a good one and as she paused Tim shot her. Great trophy.

That afternoon we watched a solitary blue wildebeest descend a mountain slope and we hiked to a position below him. Shot him on last light, Tim again doing an excellent job behind the rifle.

Lindsay and Teri spent the day in Graaff Reinet, visiting the Valley of Desolation and shopping. It was cold and the hunting was difficult. Had a chance at a waterbuck but we chose not to try a 50/50 shot through some light brush.

The sun came out and as expected the hunting was terrific.  Got a red hartebeest early in the morning.  Another longish shot which Tim managed to pull off. Carried on hunting and bumped some zebra in thick shoulder height brush. Tried stalking them through the brush but we were too low. Waited as they climbed over a hill giving us a shot. Tim made a quartering away shot on a young stallion to get the “medium size” rug Teri wanted.

That afternoon we snuck up on two waterbuck bulls grazing on the long mountain grass. Two shots and Tim had a very nice waterbuck bull.

Headed back to our main lodge after a great three days of hunting.

Visited Port Elizabeth today. Teri and Lindsay did a guided game drive in the Addo Elephant Park and we met up with them for tea. We’ve enjoyed the day off but are super pumped for kudu hunting tomorrow. Little nervous though, as always we expect kudu will be the toughest one...

Tim got a great kudu today. Unfortunately the nyala avoided us although we put in an unsuccessful stalk on a big bull only to be busted by some kudu. We enjoyed our time with Tim and Teri and look forward to next year.

I have wanted to be able to go on a hunt to South Africa for a very long time. After doing my research and discussing the hunting experience that I hoped for with Victor, I was sure that I wanted to go with Karoo Wild Safaris. I explained that I was a novice regarding hunting plains game, having only hunted whitetail deer in the US. I was assured that this is easily accommodated. Was it ever! I gave Victor a list of trophies that I would like before the trip, thinking that I would not get half of them. I was pleasantly wrong! I took ten trophies of a lifetime, including a sable antelope which was at the top of my list. I also had an exciting stalk and took an eland on Victor’s property that I later found out had the largest set of horns that has been taken by Karoo Wild. Victor is an expert professional hunter as well as host. The four different areas that I hunted showcased the natural beauty of South Africa. We hunted rolling hills as well as more mountainous and rocky terrain. Victor and his tracker, Mitchell, were exceptional at spotting game and he can spot an animal and tell you immediately if it is of trophy quality. Victor has access to numerous properties as well as his own and certainly does his homework on where to go for the species that you’re looking for. I also asked Victor for advice on how to have the trophies mounted and I believe that I was able to make some great choices on how to display them with his guidance. Victor and Lindsay made my wife and my stay one of the best experiences that we’ve ever had. They made us feel welcome instantly and their hospitality was beyond outstanding. Their lodge is comfortable and immaculate. The meals were exceptional as well and paired with delicious South African wine. I was initially concerned that my wife wouldn’t enjoy herself, but in addition to going on several hunts with me, Lindsay showed her the rugged beauty of South Africa including Addo National Park as well as a day trip to Graaff-Reinet.Now, she can’t wait to go back, just like myself. I would highly recommend Karoo Wild to any hunting enthusiast.