It's the start of our 2018 season and we were all excited to welcome Jason and Greg from California. Jason and Greg are long-time friends and this was an African hunt they'd been dreaming of since childhood.... 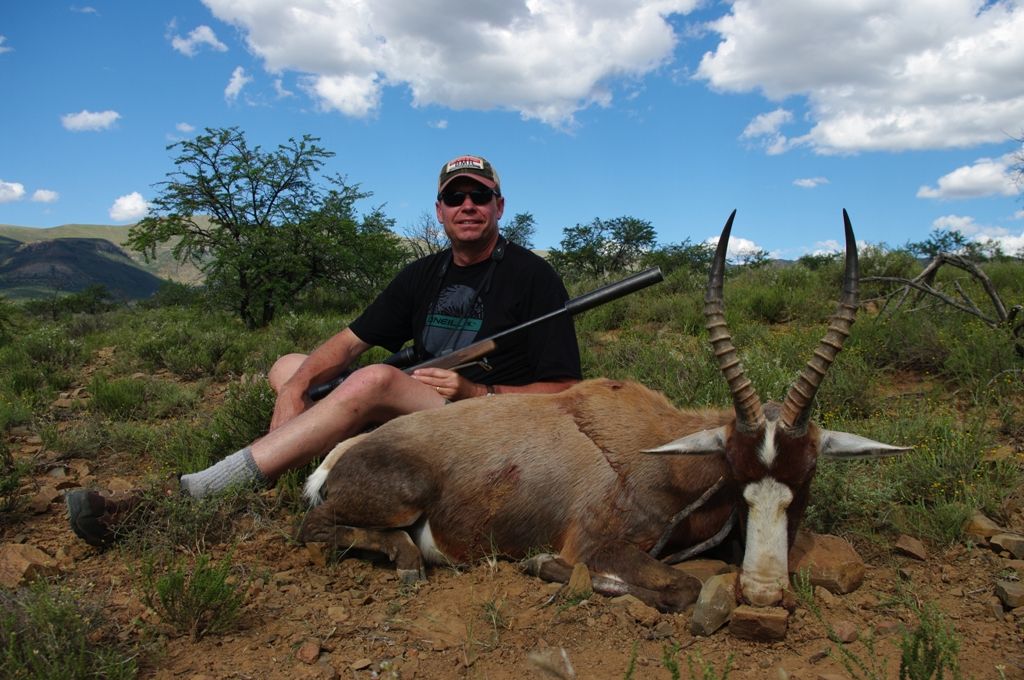 Jason shot with my Sako .270 and Greg used my CZ 7x64 Brenneke. We hiked from camp at first light in search of kudu or impala but it was black backed jackal that first caught our attention. The first one was too fast for us as he ran into a thick acacia thicket below us. The second jackal we came across was a little slower. Mitchell stopped with a jackal challenge call he mimicked using his hands and mouth and Jason made a remarkable free hand shot to take his first African animal. It's a rare thing to come across a jackal and even rarer to shoot one in broad daylight.

Later that morning we put in a stalk on a bachelor herd of impala rams. Jason's first shot was a difficult one and it flew high but we followed them for a short distance and we were able to get into a good position to make a second shot. This time Jason's shot found it's mark and he'd taken his first African antelope, a gorgeous impala ram. It was Greg's turn and we were in search of a steenbok, one of the smallest and most gracious of South Africa's antelope. Steenbok live in pairs and are very territorial, the female often bigger in size than the male. We headed to an area where I knew a good ram lived. We were soon onto him and Greg made a good shot with my Brno .243 loaded with Impala hunting solids. The solids made little damage to the cape and he should make an excellent mount.

Early the next morning we stalked a small herd of springbuck. With the wind swirling in the valley it was difficult getting close to them but we bided our time and Jason made the most of his opportunity when he made an excellent shot to get a nice springbuck ram. The springbuck is South Africa's national animal and the Karoo is famous for it's large herds of springbuck. Well done Jason.

We climbed a large mountain in search of kudu and spent the rest of the morning looking into valleys below in search of the elusive "grey ghost". Jason, from his 6ft5" frame spotted four large kudu bulls browsing on the mountain on the same level as us. We were three hundred yards out and snuck in closer to 220 yards. The largest bull was a good one and was periodically moving in and out of the bush as he broke the trees with his horns. It was a heartbreaking moment and we never got a real chance with the dense bush surrounding the kudu hindering our opportunity. The "grey ghost" was living up to it's name. Kudu bulls are elusive beyond what most give them credit for and even though we have a proud record of hunting kudu trophies, we approach every kudu hunt with a certain measure of trepidation. It's only once the kudu is in the salt does a PH every truly relax and enjoy the hunt.

The next day was Greg's big day as he shot a good springbuck ram early that morning. That afternoon we sat in wait at two different spots where kudu are known to move through in the late afternoon. Jason and I sat on top of a ridge overlooking a large grass filled plain. Mitchell and Greg sat against a mountain, overlooking a narrow valley. Just before dark, a large kudu bull emerged and browsed along the far edge of the plain, agonizingly out of range. He moved slowly past our position, never getting any closer. With no cover between us and more kudu emerging, we knew there was no way of getting closer without a kudu spotting us and sounding their hoarse kudu bark. It was a beautiful afternoon and we enjoyed the moment even though we weren't successful. Greg and Mitchell were perched against their mountain when a big warthog boar came jogging out their valley. He paused and bent down to forage, front legs flat on the ground and using his tusks to dig. Greg fired and the boar ran 100 yards before collapsing from a lung shot. We seldom see warthog in this area and we were pleased for Greg as a good warthog was high on his list.

At first light the next morning, two big kudu bulls crossed paths with us and we set off after them. The back one paused long enough to give Jason a shot. The shot hit low on the leg and we followed, scrambling over some rocks. The bull was running into a thickly wooded valley when Jason hit him with his second shot. He'd taken a fantastically old kudu bull. What a trophy!

We drove out a steep mountain road to begin a hike and Mitchell and Bankies returned with Jason's kudu to be skinned off. For the next three hours we hiked up and down the Winterhoek mountains in search of a kudu for Greg. We several troops of baboons, klipspringer and cape grysbuck but no kudu bulls. Scratched and tired we climbed down the mountain and fought our way through thick valley thorn bush to meet the guys at the foot of a valley. Five miles of climbing and fighting through thick mountain bush. Very impressed with these guys' fitness and stamina!!

Later that afternoon, we waited on the side of a mountain for events to unfold. Several hours later, some kudu cows emerged and grazed below us. As the shadows lengthened, the horns of a big kudu bull appeared above the bush on top of a hill 700 yards away. We waited anxiously as he slowly made his way down to the cows. We were sure he'd disappear over the ridge directly in front of us but he stayed on course, moving just within the sunlight side of the ridge. At 250 yards, he walked right past the cows towards the valley floor below us. Greg had to act quickly, the valley floor was hidden from view and we'd lose him if he moved another 30 yards. He paused and stretched his neck to graze on an old Shepherds Tree . Greg seized his chance. The shot hit on the shoulder and the bull ran 50 yards before stumbling, falling and rolling a short distance down the slope. A terrific hunt and trophy!

We headed north the next morning to a concession for a couple of days of hunting. We spotted some baboon at a waterhole and made a good stalk which soon turned into a leopard crawl. It ended in the unthinkable, Greg shooting a baboon male on foot. Baboon have such amazing eyesight and senses that it's near impossible getting close to a baboon on foot if they sense danger. Later in the day, Jason and I also made a terrific stalk on a blesbok ram. We waited patiently before moving from bush to bush. Within 150 yards, Jason manouvered his rifle barrel through a few branches and we set up to shoot. He turned broad side and Jason made another good shot. We had several sightings of white rhino and giraffe. That night we stayed in an old Cape Dutch cottage and returned to our lodge the next morning. Greg was still keen on hunting a duiker and we walked up a valley that afternoon. We spooked an old ram below us and he climbed the opposite slope and hid behind some bush. Greg found an opening to shoot through and his shot was good, the ram running and expiring in a cloud of dust.

We visited the Addo Elephant National Park the next day and had some good sightings of elephant, cape buffalo and plains game. We had a good laugh at a teenage elephant at Carol's Rest waterhole that woundn't let any of the other lesser animals drink while he hogged the waterhole to himself. He'd lower his head and trumpet at zebra, flick his back leg and splash warthog and stare down fellow elephant to prevent them having a drink.

This was a super fun and enjoyable hunt with two terrific guys and we were sad to say good bye to our new friends. We hope our paths will cross again sometime in the future.

Just got back from First Trip to the Karoo. Victor and Lindsey are amazing people and new friends. The hunting and Lindsey's cooking exceeded my expectations. All of their workers were awesome as well. Anyone looking for a remarkable hunting safari would be well advised to book a trip with the Karoo wild safaris. Drink a springboky for me my friends. God bless Jason.