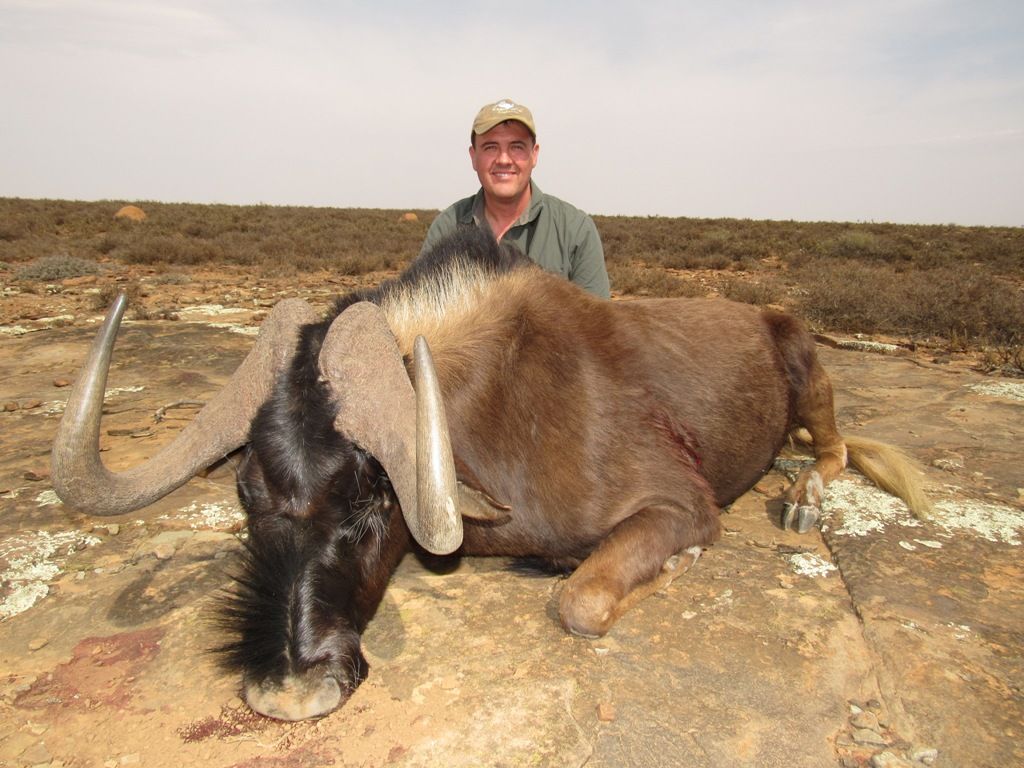 The first day we had an easy day. We searched for kudu but came across nothing that interested us. Geoff's hunt began in ernest the next morning with him taking a spectacular black wildebeest bull and blesbuck, within hours of each other. The next day we were high in the Camdeboo mountains in search of red hartebeest when we spotted a kudu bull moving down the slope. We reacted quickly and moved a short distance down a track. Geoff set up and the bull paused briefly. Geoff's bullet found the shoulder and the bull collapsed. He was a beautiful kudu with horns turning out at the tips. He was a very different bull from Geoff's 2018 kudu which was exceptionally wide. Exactly what we were looking for.

The search for red hartebeest and waterbuck continued throughout the day. We were briefly onto a waterbuck bull but he escaped our interest. It was misty and raining lightly the next morning and spotting animals was tough. Early that afternoon we glassed a mountain slope and saw a bachelor herd of waterbuck bulls moving directly down the slope. We followed for a distance and waited on a ledge directly above them for them to emerge into open sight. The targeted bull grazed directly away from us but paused quartering away and Geoff squeezed a round off. There was a dull thud of a hard impact and the bull fell and rolled down the slope coming to a stop in a crash of branches and dust. It was a tough day of hunting in the rain and we enjoyed our moment of hunting success.

We travelled 3 hours north the next day for a few days of sable hunting in the Northern Cape. We wanted to find Geoff an amazing sable trophy and I knew iwe would need to rely on local knowledge on the 40,000 acre reserve. Our local tracker had seen a good sable in the "mierkraal" area in the days preceeding our arrival and we headed in that direction. We climbed a hillock and glassed for awhile before I saw a sable lying under a clump of bushes in the distance. On closer examination we established that he was a younger bull. On the walk back to the hillock one of the trackers spotted another sable a little further away. We began a long, slow stalk. We knew locating him would be the hard part, now we needed to take our time and not make any mistakes on the approach. The conditions were against us, not a lot of cover and the wind was shifting coming off our left shoulder. Although still 600 yards out the sable was facing our direction and seemed fixated on something directly beyond us. His ears were standing up in that typical sable "what's going on here way". He looked like a spectacular bull so we decided to wait it out. An hour ticked by before he changed his focus and began grazing again. We used the opportunity to put a low ridge bewteen us which allowed us to get much closer. We were 200 yards out now but he'd bedded down amongst the shade of some rocks and trees and there was no shot. Patiently we waited. Another three quarter hour ticked by and we knew he'd stand up again soon. When he did, Geoff was ready, the shot hit and the bull stumbled and bucked, dashing out of view. A few heart stopping moments later we located his blood trail, we followed, spotted him and Geoff put in a second round sending him down dead this time. He was a magnificent bull and it was a top stalk. I was overjoyed for my friend and fetched Kerry from the pick up so that she could share in the moment with him.

There is a large herd of red hartebeest on the reserve and we wanted to spend the morning focusing on them. Right out the lodge we spotted a large herd on the edge of a plain with a little cover to allow for a stalk. We made the yards and to our luck saw a dark, bull amongst the cows. Geoff's shot hit true again. The bull ran off a short way before collapsing in a heap. Red Hartebeest can be a tricky customer and I was delighted for Geoff. We returned to our main lodge that afternoon. The focus for the remaining four days would be on bushpig, bushbuck and klipspringer.

Bushpig are shy animals. Almost exclusively nocturnal, we hunt them on bait sights at night with the aid of a permament light illuminating the baited area. We run 4 year round bait sights. We lucked out the first night, with only a group of sows coming into bait. The next day we hunted bushbuck. We passed on several smaller rams before spotting two nice rams grazing in a small open patch. It was a long shot so we made plans to get closer. When reached their original spot they were grazing 300 yards away moving towards a thick line of bush. We knew our time was limited before they reached the cover of the bush. The lay of the land allowed us to dip below their line of sight from that point. The downside being that we'd have to approach them not being able to see them from that point onwards and we'd only see them again at approximately 40 yards from them. We scurried across the depression in the land and moved stealthily until I gradually made out the top of the bushbuck's back. We paused until his head sank down to graze and we inched closer, gun and sticks ready to fire at moments notice. We were 30 yards away when we could make out the midline point of his back protruding above the long grass. Geoff shouldered his rifle. I whispered to him to hold off until I could judge his horns. The bushbuck's head lifted, I said shoot...bang. The ram 50 yards before collapsing. He was a beautiful bushbuck, old with a nice set of horns. That was a fun stalk!

That evening an easterly wind was blowing directly off our backs towards the bait sight. No luck.

Geoff had shot a klipspringer last year but unfortunately the shot hit the ram in the head ruining the cape. We needed to find Geoff a replacement cape for his bushbuck. It needn't be a spectacular trophy as the original one was a very nice, mature ram. We drove a mountain road in search of klipspringer and we spotted one near the lodge. Geoff's shot with my 243 using Impala solids was good and our klipspringer cape problem was solved. It was our last evening and Geoff and I were intent on giving the bushpig one last go. We knew from the trail camera footage that they were hitting the baits before 7pm and we set our cut off time at 8pm. 7pm came and went and still no pigs. At 7:45 four sows and youngsters emerged from the nights shadows and began silently eating. Shortly afterwards a large boar emerged. He was a big pig and given our time investment in baiting and waiting for bushpig Geoff and I were tangibly excited. The boar wasn't playing along though and for the next 20 minutes he was either directly or partially behind a female, eating his meal in the safety of their shadows. He made Geoff wait and the minutes ticked by. Geoff kept cool though. His head and shoulder was behind a female and when he began moving slowly backwards Geoff recognized the moment. There was a narrow channel and Geoff's bullet threaded it, the squeeling pigs scattering in all directions and the boar disappeared out of the light. We heard him grunting as we walked the 70 yards to the bait sight. He was dead 30 yards away. What a magnificent boar, the biggest bodied one we've taken so far.

We bid farewell to Geoff and Kerry the next morning but look forward to more hunting adventures with our friends in September 2020.