George returned for his 2nd plains game hunting safari with Karoo Wild Safaris. George has hunted throughout Africa on numerous occasions and this safari was as much about experiencing the natural beauty of the Karoo as it was about the hunting... 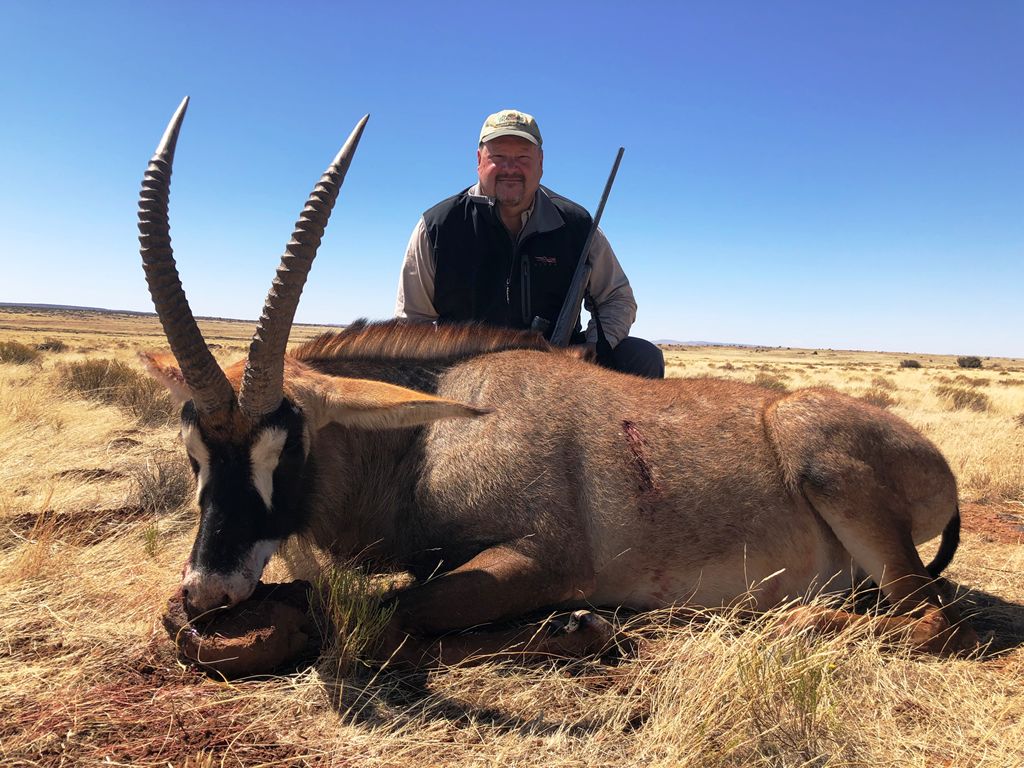 The hunt began with George getting a Burchells Zebra stallion. A long stalk was rewarded handsomely. The zebra at higher altitudes this time of the year and we made our stalk count. Later that day, George shot a large male baboon that had wandered into the open field in front of his chalet.

We spent the following day in Graaff Reinet enjoying the vistas over the town and surrounding area from the Valley of Desolation. We followed b\that up with lunch in the shadows of the 400 year old Dutch Reformed Church in the centre of town.

That evening we set out in search of the nocturnal aardwolf. The aardwolf is classified in the hyaenidae family and is related to the brown and spotted hyena. Unlike it's cousins however, it has a very specific diet and only occurs in areas where termites of the family Hodotermitidae occur. Because the aardwolf can't be called in or baited, hunting them always requires a high degree of knowledge of the habits of the local population. We knew that a lone male was resident in a specific area and we also knew that he didn't emerge until well after sunset. We had a barbecue that eveing and at 9pm began glassing the area which was a short drive from the lodge. We weren't to be disappointed, the aardwolf soon appeared in our search light. George made an 80 yard shot and the aardwolf was down. The Impala solid worked well, causing enough hydrostatic shock to kill the aardwolf swiftly but minimizing the damage to his hide to two small holes, the size that a hole punch makes in paper. He was a fantastic male specimen for George to add to his aardwolf taken last year.

We headed north the next day for two days of hunting where we were able to sneak up on a large roan. George's two shots both found their mark and the roan bull ran a short distance before collapsing. Later that afternoon we were successful on tracking down a large herd of Hartmanns Mountain Zebra. We put in a stalk and George shot a nice stallon. The Hartmanns Zebra along with the Cape Mountain and Burchells Zebra is one of three zebra sub-species that are endemic to South Africa. All of them have distinct differences in their patterns and colourings.

We were up at first light the next morning and tracked a male gemsbuck across a vast plain. Our patience was rewarded when the gemsbuck rounded a small rocky outcrop island in the centre of the plain. Using the outcrop as cover we were able to close the distance to 220 yards. George's shot was a little far back but the bull didn't go far before George got off another shot. He was a magnificent bull with a nice horn shape. We travelled back to our main lodge that afternoon.

The next three days was spent hunting our area. George was successful in getting a bontebok, kudu and kalahari springbuck. We wprked hard for our animals and we got some terrific trophies. The spingbuck hunt was mentally challenging. Four missed shots at various springbuck rams before we realized the 243 had taken a big knock and was hopelessly out. We swopped out to a 270 and George had a springbuck with the very next shot.

I enjoyed another eventful and interesting time in the Karoo with George and as always look forward to our next hunt.