Howard and Magi from Colorado return to hunt with Karoo Wild in South Africa.

Howard and Magi hunted with us in December 2015 and returned for their 2nd hunt with Karoo Wild Safaris. They've become close friends and it was great to welcome them back to the Karoo. Howard does all his own taxidermy and it was superb.... 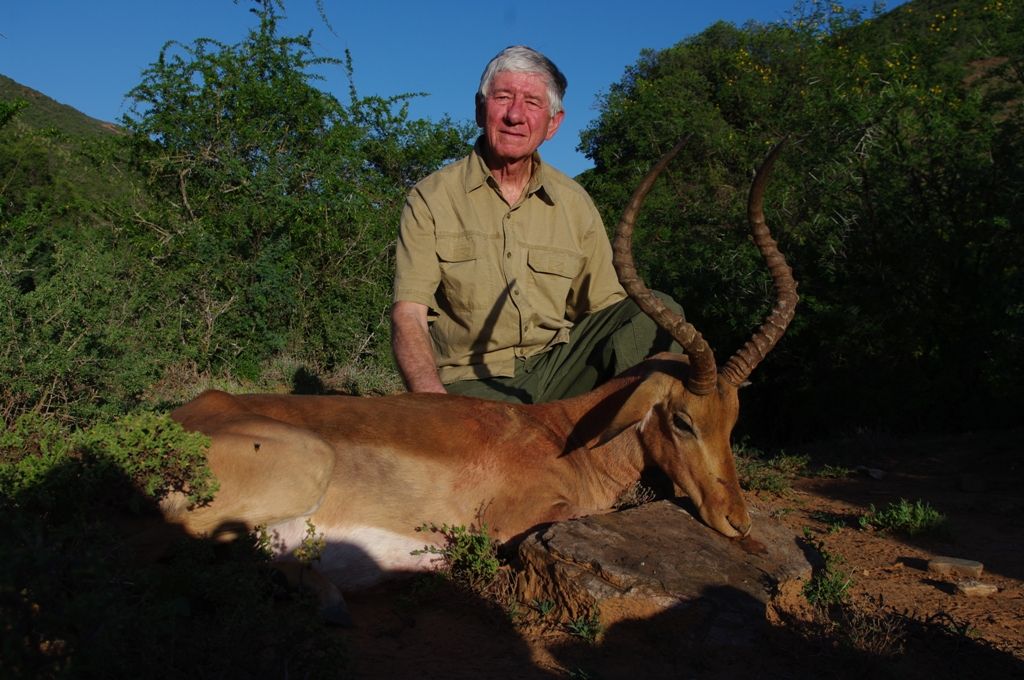 Howard started off his hunt by taking a good impala on the first day. The first full day of hunting Howard took a superb nyala and a big zebra that ran and expired in a deep kloof. The guys field caped it and carried the meat out in pieces. Quite fittingly we enjoyed a meal that evening of grilled nyala fillet and potato rosti.

Day two was another successful one with us putting in a stalk on a good waterbuck bull who was sunning himself in the first rays of the day. That afternoon we got a blesbuck ram.

Early the next morning we drove out a mountain and found several herds of blue wildebeest grazing on the sweet grass above the mist line. Howards shot found it's mark and the blue wildebeest went down promptly. We were waiting that afternoon for kudu to emerge when a beautifully shaped impala ram grazed from tree to tree below us. We left our hiding place and stalked to within 100 yards where Howard made another great shot.

The next morning we hunted gemsbok and were waiting for them to graze in our direction when the biggest cow turned and inexplicably walked straight towards us, the herd following her every move. At 50 yards Howard made a shot and we followed for several kilometeres before getting in a second shot to put the gemsbok down. What a trophy!

That Friday afternoon Howard shot a kudu that came out of some thick bush. It's the start of mating season and he was following the cows into the open. The rest of the weekend was also productive with Howard taking a great springbuck and steenbok.

Howard and I left for two days for hunting in the Camdeboo where he shot a fantastic red hartebeest and black wildebeest. We had close encounters with a herd of elephant and a lone buffalo bull that was angered by our presence. The next day was tough going but we managed to shoot a warthog boar that Howard was seeking.

The last day of hunting we sought another steenbok to replace the one whose cape was badly damaged by a shot to the upper neck. We soon found a similar one and Howard shot it this time with my .243 loaded with Impala hunting solids.

Thanks Howard and Magi for another fantastic time! We hope to see you again next year.