James and Dorothy joined us from London on a short 3 day hunt whilst on holiday in South Africa. Having hunted in South Africa many times before but never in the Eastern Cape, it was a honour for us to host them on their first karoo safari. 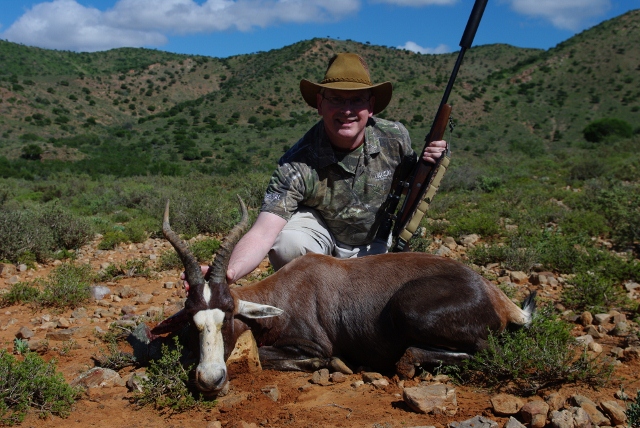 It rained for five days over easter weekend and upon their arrival on the Tuesday after Easter it was just beginning to clear. We set out on Tuesday afternoon and came upon a small herd of impala. It was raining lightly and the wind was gusting from different directions so getting in close proved challenging. James took a lengthy shot at a good impala ram but unfortunately hit it low on the front left leg. It immediately set off for the cover of the river thicket below. We were able to track it easily due to the wet ground conditions but never got in another shot as it hugged the acacia thicket along the river course. It was getting dark and we decided to take up tracking at first light. We tracked the impala the next morning for a couple of hours and were able to put it down with a running shot near where we left the tracks the previous afternoon.

Later that morning we were hiking along the edge of a hilltop when we startled a blesbok ram who was grazing unseen in front of us. It ran over the hill and we decided to follow in the event it would settle down and graze on the east side of the hill. We stalked silently avoiding the loose stones and rocks of the "koppie" and came upon it lying down. It's difficult to make a good body shot on an animal lying down! Shot placement is not the same as the vitals are at different angles as one would expect them to be. We were patient and it eventually stood up and James put in a good shot to put it down.

That afternoon we opted to wait at a spot where kudu bulls are known to graze out in the open. We arrived at our spot on the south slope of a mountain at 2pm. Our patience was rewarded when at 5:30pm just as the light was fading a large kudu bull tentatively emerged from the valley thicket. James spotted it when it first appeared and we had the opportunity to wait for the perfect shot while it browsed from tree to tree, totally oblivious to our presence. James made a perfect lung shot and it turned sharply and ran 40 yards before expiring. A beautiful autumn afternoon hunting one of Africa's most majestic creatures, it doesn't get much better than that.

Early the next morning, we began our stalk from camp and soon came upon a herd of springbok. We positioned ourselves and waited, allowing them to slowly graze on a downhill path before us. As they neared however, they sensed danger and filed back uphill diagonally away from us. The ram however brazenly stopped and turned to get a good look at us and James put him down with a heart shot.

Having taken their four desired species, James and Dorothy's karoo safari was over too soon! We spent the afternoon watching kudu browse in the warm afternoon sunshine and watched the sun set on a memorable karoo safari. Lindsay and I thoroughly enjoyed James and Dorothy's company and wish them a successful "non-interactive" photographic safari in the Kruger National Park.