We were happy to welcome Van and Diane of Artistry Outwest Taxidermy Studio in Weippe, Idaho. They have hunted in Africa several times and on this occasion brought their friends Dave and Rich on a 10 day hunting safari.... 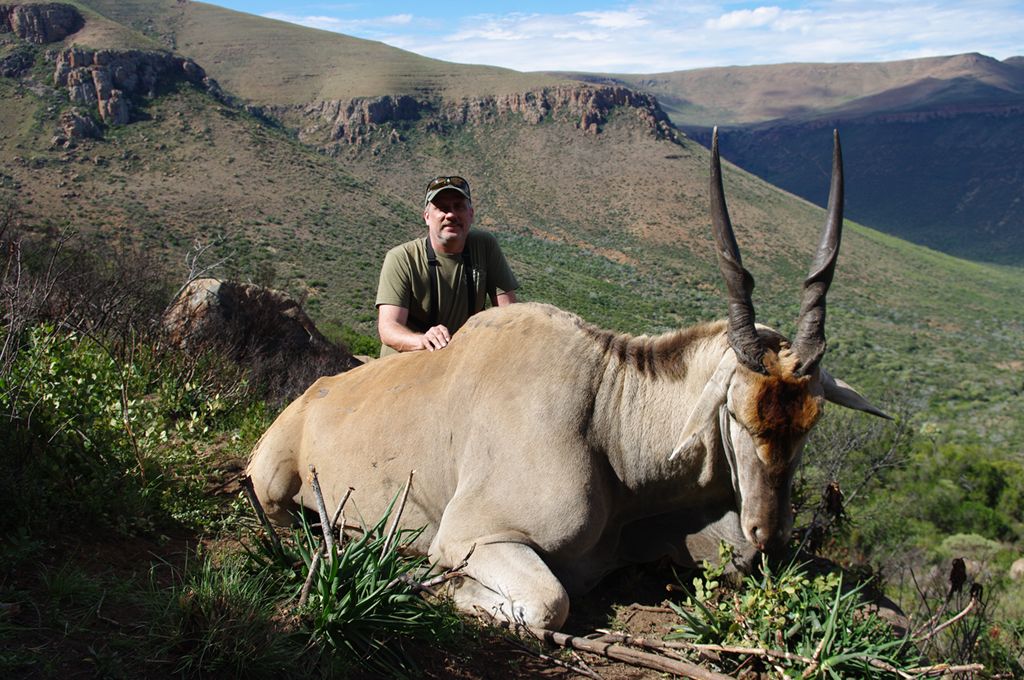 Van brought his 300 Win Mag and .22 Hornet. Dave and Rich both hunted with 7mm rifles.

Diane's hunting luck continued the next morning when a long stalk finally put her in a good position to take an outstanding black springbuck. That afternoon, Van made a long downhill shot on a common duiker that stepped into a clearing. We headed out that evening on the search for the third member of the hyena family, the elusive aardwolf. Van had some issues with his 22 Hornet and soon changed to my .243 shooting solid bullets. We saw plenty of aardwolf before getting a clear shot and Van shot a large aardwolf male. On the way back we bumped into a porcupine which Van promptly shot as well. Dave hunted a springbuck ram that afternoon.

After a late evening we took it easy the next morning. That afternoon Diane spotted two kudu bulls in a clearing from a thousand yards away. We began our hike and subsequent stalk form the very spot where we first spotted them. As we neared the spot we last saw them we stalked dead slow and were lucky to see the kudu bulls horns above the bush as he browsed the trees on the ridge above us. Diane set up and the shot hit him hard behind the shoulder. We followed the blood trail two hundred yards to where he lay expired in thick bush. Diane's first kudu!

That same afternoon both Dave and Rich shot their first kudu!

The next morning Nibbs, Dave and Rich headed south to the coast for caracal. Myself, Van and Diane travelled south for two days of hunting at our Camdeboo concession. Dave's dog pack was onto a caracal at first light that morning and he got a 18 kg male cat, the largest cat taken in 2017 so far. We were super excited for Dave as a "caracal cat" was top of his African wish list.

We had several failed stalks on black wildebeest on the open plains before Van finally got a shot at a big bull. The shot hit a little far back and after some heart stopping moments where we lost the animal and blood trail completely, Van was able to get another shot in and he soon went down in a nearvy riverbed.

We had some sightings of white rhino and elephant that afternoon but despite several attempts couldn't connect with a large kudu bull that we spotted from a vantage point above.

Early the next morning we drove up the long 4x4 track that ascends the rim of crater valley. There was an icy breeze blowing on the top but saw a staggering amount of eland grazing on the short fresh muntain grass. The wind was against us and with it getting colder and the hunting conditions deteriorating we began our descent of the mountain. Van, Diane and I decided to leave Mitchell at the truck and walked slowly down the mountain track hoping to spot eland grazing on the slopes. We'd barely began our hike when we spotted a huge eland bull below a cliff face. He was standing out of the wind sunning himself on a large rock, with a 15 foot drop directly below him. We stalked a short way up towards him and at 220 yards we could go no further without being seen. It was a catch 22 situation with a real risk that a shot would send the bull falling 15 feet down and tumbling further the mountain slope. But he was too big a bull to pass on and we hoped a lung shot would see the bull pulling back and doing a controlled descent of the rock he was perched on. Van's shot hit on the left shoulder and the bull lurched forward before falling into the space below him, tumbling end over end before coming to a halt 70 yards down the slope. He made an attempt to stand and Van promptly put a second shot in. Luckily there was no major damage to his shoulder cape and horns. What an experience and hunt...

We returned to the lodge that evening where we were reunited with the other group and swopped hunting stories around the fire.

The next morning we hunted springbuck and Diane made a difficult shot to get a great common springbuck ram. Rich also shot a springbuck and Dave finally bagged a gemsbuck bull that afternoon. That evening Van and Rich both shot porcupines.

We bid farewell to our new friends the next day. It was a fun 10 days of Africa hunting and great memories made.

Can't say enough about how great our trip to Karoo Wild was! Outstanding staff and great food. Accommodations were above and beyond with coffee and tea right in our room.

Diane and I have been to 3 other places in Africa and this was one of our best hunts. Victor works his butt off to make sure that you get opportunity's at all the animals you have on your wish list. That's a rare thing in Africa hunting as most want to spend all your time on the expensive animals. We saw ourageous amounts of quality game. We shot some amazing trophies. This is a real hunt, we had a lot of fun hunting and joking around. The terrain was the most beautiful we have seen in all our travels in Africa. Thanks again to Karoo Wild for all the hard work that went into our hunt. We will return.