Brothers Aaron and Zach and their father Jo along with their wives Lindamarie, Jessica and Tina joined us from New York on their first trip to Africa. Zach and Jessica's two year old daughter also traveled with.... 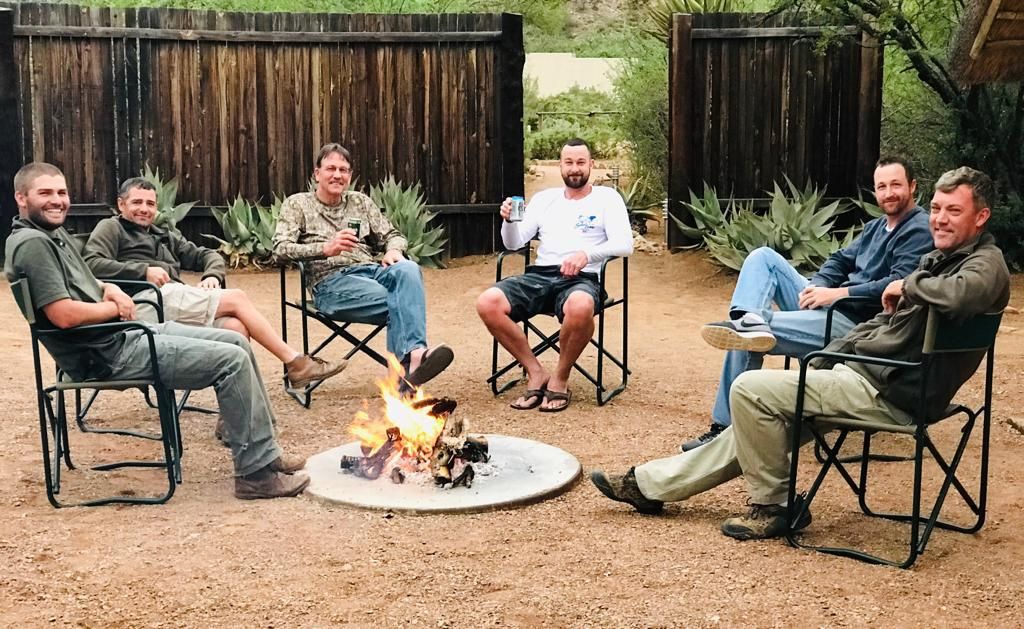 Nibbs and Arnold guided the guys on their hunt and they had success on the first afternoon with Zach and Jo getting good kudu bulls. Zach and I waited in an area where kudu are known to come out in the late afternoon and right on sunset a bull made his appearance. Arnold and Jo spotted a bull grazing in an open plain and put in a long stalk.

Early the next morning and afternoon both Zach and Jo guided by Nibbs shot impala rams. Aaron stalked onto a terrific kudu bull late that afternoon and made a shot. The bull was hit but disappeared into a thicket. Blood was followed but Arnold and Aaron wisely decided to return the next morning. With the help of the entire hunting team, they found the bull and put him down. Aaron followed up on his good fortune by taking an impala ram that afternoon. Zach and Nibbs got a black springbuck ram. The ladies visited the Addo area with Walter as their tour guide. They rode and fed elephants at the Addo Elephant Back Safaris centre and after lunch they spent some time in the Addo Elephant National Park where they had several sighting of elephant.

The day of the 6th March was another action filled day with Zach hunting a common springbuck and Aaron getting a black springbuck. Tina, Jo and myself travelled to Port Elizabeth harbour where they joined Raggy Charters on an ocean safari in the bay. We had lunch at the Algoa Bay Yacht Club before returning in the afternoon.

We all moved north to our lodge in the Camdeboo for two day of hunting gemsbuck there. I transferred the ladies to Graaff Reinet where they enjoyed lunch and a tour of the town with Karoo Connections. After a visit to the Valley of Desolation we returned to the lodge to join the hunters. Jo and Zach's hunting luck continued that morning with them both getting gemsbuck early that morning. The afternoon was a little trickier with Aaron lucking out on his gemsbuck. We enjoyed a braai on an open fire by the lodge, surrounded by a small gathering of white rhino.

The next morning was a little misty and cold and hunting was tough. The ladies enjoyed a game drive in an open vehicle and lunch at the main lodge. Later in the morning, we spotted a herd of gemsbuck against a mountain slope. Aaron, Zach and Nibbs put in a long stalk which ended in a successful gemsbuck hunt. We returned to the main lodge that evening.

The last day was spent with Aaron hunting a steenbuck and some rest in camp. A memorable hunt had come to an end. We enjoyed hunting and vacationing with the Kirby family and wish to welcome them back to South Africa someday soon.

I would highly recommend anyone looking to book a safari, book with Karoo Wild Safaris. Not only is victor’s land amazing, but his accommodations are first class. Nibbs and Arnold (our PHs) exceeded our expectations and couldn’t have been better people. The hunting blow us away, but victor and his staff were able to have day excursions planned for our wives. It was an unforgettable trip for both the men and women. There isn’t many things better than shooting a big Kudu Bull, but victors wife, Lindsey’s cooking was just as impressive as the hunt. We came as strangers and left as friends. We are already talking about when we are going back.