Longtime friends, Geoff and Chris and their wives, Kerry and Mary Ellen, from Queensland, Australia hunted with Karoo Wild Safaris on their first African hunting trip.... 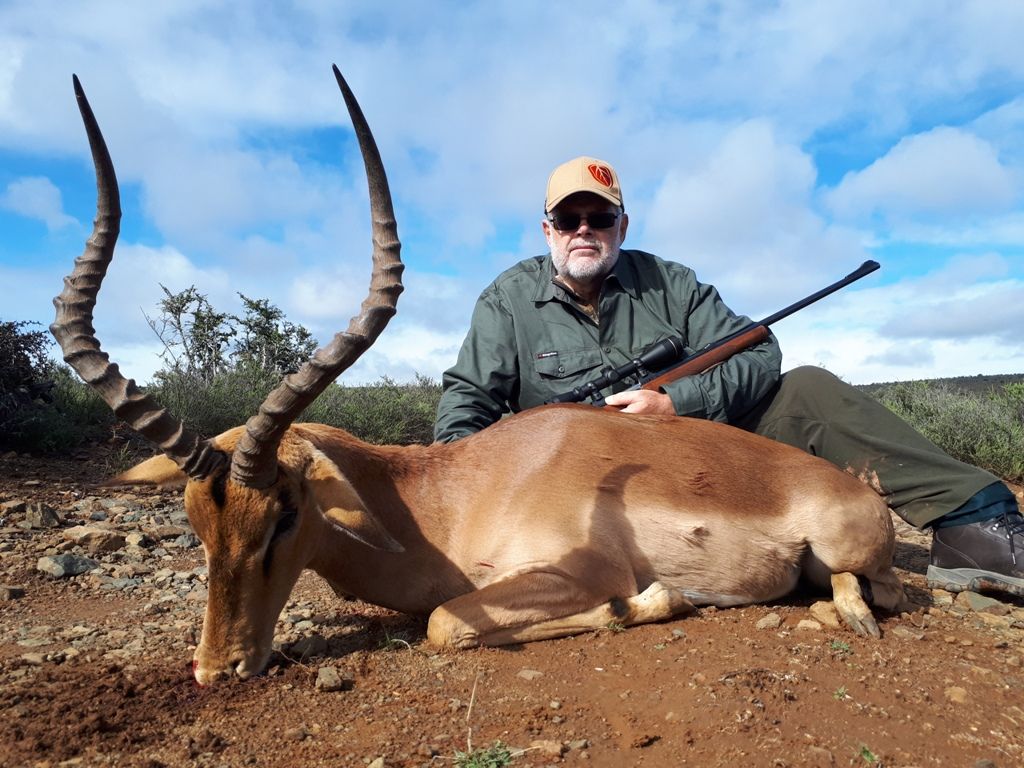 Geoff, Chris and myself had been planning the trip for a couple of years and we were excited to finally meet everyone in person.

I hunted with Geoff and Arnold guided Chris on his hunt. Geoff hunts with a Sako Finnbear .270 at home so he felt very comfortable shooting with the identical model. For the larger game, he used my .375 Ruger. Chris used my CZ 7x64 for all the animals on his list.

After settling in to camp and having fired some shots on the range, we headed out into the bush late that afternoon. We spotted some kudu high on a ridge. There was a large bull on the periphery of the herd and Geoff set up to take a shot. The shot hit the bull hard and we followed the bull over the ridge where we picked up the blood trail. The bull was moving down into a riverine thicket and Geoff's second shot put him down. What a fantastic start to the hunt.

Our good hunting fortune continued into the second morning. Geoff and I were soon onto an impala ram. We put in a good stalk and waited patiently for the broad side shot. The shot unfortunately missed but we followed the small herd of impala rams as they moved through some riverine bush and out a hill on the opposite side. We new we'd get another opportunity if we remained patient and a couple of hours later they settled down and allowed us a second opportunity. This time Geoff's shot was true and he got himself a beautiful impala trophy. In the distance we heard a shot echo and we knew Chris had some impala success as well. Geoff and I carried on hunting and later that day we connected with a beautiful copper springbuck. Chris and Arnold hunted kudu that afternoon and although they saw several large herds, that special kudu bull still eluded them.

Our day began spectacularly again, Geoff bagging a magnificent steenbok ram. We used a .243 with bullets loaded down to minimize damage to the cape. The suppressor fitted to the .243, allowed us to keep hunting the same area. There were several herds of common springbuck in the area and we got onto a large ram which Geoff promptly shot. That afternoon, in a different area, we ambushed a herd of black springbuck. Geoff's shooting again was on the money and he was now well on his way to completing the springbuck slam. The veld was wet from heavy rain the previous week and we got bogged down in a marshy area. The four wheel drive was rendered useless as the pick up sank down onto it's differential. We tried different tactics with little success. We eventually got a second vehicle to help and we rode in large flat rocks. We dug out the mud in front of all the wheels and replaced them with the rocks. After a period of rocking back and forth we were able to ramp the vehicle onto the rocks and escape from the marsh. Free now, we headed home. Chris and Arnold had ambushed a beautiful kudu bull and we celebrated hunting success that evening.

Geoff, Kerry, Chris, Arnold and myself headed north the following morning to a concession in the Camdeboo for 3 days hunting. Lindsay and Mary-Ellen took a trip down the coast to Cape Agulhas and Cape Town for a few days of sight seeing.

Geoff and I were after eland now and we followed a herd as they moved through some thick bush. The wind shifted and they moved across the narrow valley and climbed out the opposite slope, taking cover in some thick bush. We followed them and then back tracked, hiking around and to a position high above them. Kerry and Mitchell (tracker) stayed below and were able to watch the stalk from a distance. We were watching them as they browsed 200 yards below. We identified a large bull as a shooter, he was browsing along a game track facing directly away from us. Geoff was ready to shoot, waiting patiently for him to turn broad side. An hour went by and there was no change in his position. He moved along the track and disappeared into some bush. He was gone for a few minutes when he emerged again, this time slightly quartered to us. Geoff was ready in an instant, the sound of the 375 thundering through the valley. The bull collapsed, dead right there. We moved down towards him where Mitchell and Kerry met us. The bullet had entered the base of his neck, no doubt causing massive internal damage. He was a magnificent eland bull! Chris and Arnold had some luck of their own, getting a gemsbuck early that morning and also bagging an eland around midday.

After lunch, Geoff and I hunted for blue wildebeest and made a successful stalk on a small herd. The 375 did the trick again, the blue wildebeest bull running a short distance before expiring in a heap of dust.

Early the next morning we heaed high into the mountains in search of gemsbok. We spotted one on the edge of a plateau, Geoff's bullet hit and the gemsbok ran downhill. We followed and set up for a second shot as the bull was crossing a creek bed. The shot put him down and he expired at the waters edge. Chris and Arnold were successful that morning on a waterbuck and burchells zebra. Late that afternoon, Geoff and I used a 4x4 track to ascend the mountains looking for klipspringer. It had snowed the week before and we were on the edge of the snow. We left the vehicle and hiked along the edge of a cliff, crossing several mountain springs and waterfalls. Although unsucessful, we enjoyed the hike and breathtaking scenery.

We returned to the same spot early the next morning. We saw several klipspringer in the distance but there was no possibility of stalking closer. Michael (tracker) spotted a klipspringer pair 100 yards below us. Geoff set up for the shot. The ram was lying down quartered towards us and it was sharply downhill, at least 50 degrees. It was a tough shot but Geoff was up to the task, the bullet finding its mark. He was a beautiful, old klipspringer ram. Late that afternoon we all hunted a different area for warthogs. We sat in different positions, waiting for warthogs to move onto an open field. Around sunset, a very old boar with a good set of teeth ventured into the space in front of us. Geoff made a terrific shot to bag what was to be his first of two warthogs. While we were taking photos, we spotted another boar moving on the other side of the field. Chris and Arnold set off and stalked to within 200 yards. The shot was true and the boar ran dead on his feet, cartwheeling in the air as he ran head first into a earthen wall on the perimeter of the field.

We left the concession the next morning. Geoff and I were after a white springbuck, the final springbuck needed to complete the slam. The area was open with little cover but Geoof and I were able to get close enough to an old ram. He was a good ram, with worn tips and the horns kicking back. Chris and Arnold began their hunt of the tiny animals by taking a steenbuck ram. We all met up at the lodge that evening, Lindsay and Mary Ellen returning from their trip to the Western Cape.

We were fortunate to connect with a nyala the next morning. We spotted a big bull in a clearing and stalked closer. The bush got thicker as we approached, our visibility was down to 20 yards. We were standing motionless, hoping to hear him feeding when he suddenly appeared 80 yards ahead of us. The shooting sticks were up in a flash and Geoof made a snapshot to put him down. What an exhilirating stalk! Chris and Arnold hunted a common springbuck ram that morning. Later that afternoon we all headed closer to the coast to search an area for cape grysbuck. We didn't connect with a grysbuck ram but both Geoff and Chris both shot common duiker rams.

The next day the group spent the day viewing game in the Addo Elephant National Park, enjoying  dinner at the park restaurant.

Bushbuck was on the list the next day. We headed to a coastal concession, renowned for its' large number of bushbuck. From our vantage on top of a hill we spotted a bushbuck ram in the distance. We hiked closer but the ram had moved off into thick bush. Returning to the hill, we spotted a warthog boar lying in the long grass 20 yards ahead of us. We waited for awhile for him to show himself but he remained resting in the grass. I flicked a stone in his direction. He stood up and Geoff shot him. He was a fantastic specimen of a warthog, life at the coast had been kind to him up until today. We hiked along a ridgeline, pearing into clearings. At one such clearing, we bumped an old bushbuck ram who dashed to the edge of the bush but inexplicably languished at the edge, peering throught overlying branches at us. At 80 yards, there was no missing and the ram dashed a short distance before expiring. He had exceptionally thick horns and must have been close to 11 years old. Chris and Arnold had similar success and also shot a beautiful bushbuck ram. We visited Relive Africa Taxidermy on the trip back to the lodge and the guys met Paul and had a chance to discuss their taxidermy requirements with him.

Chris hunted a black springbuck the next day. Geoff and I continued our search for cape grysbuck but were unlucky not to connect with a good ram.

Twelve days of hunting adventure had come to an end. We shared some fantastic memories with Geoff, Chris, Kerry and Mary Ellen and look forward to making some more in 2019!

I hunted with Karoo Wild Safaris with long time hunting partner in September 2018 and we an amazing time. Victor and his staff worked hard to provide us with a hunt of a life time. The areas where we hunted were spectacular, huge Rocky Mountains to open plains with animals everywhere you looked. Lindsay took my wife on a four day tour down to Cape Town, and a couple of trips into the nearby local town which she loved. The accommodations were first class. The food was absolutely first class and we really enjoyed tasting the different game meats on offer. I would highly recommend Karoo Wild to anyone who was looking for an African hunting experience.

We have rebooked and are coming back again