We were priviledged to welcome Mark and Deborah from North Carolina to South Africa on their first plains game hunting safari in South Africa. Mark had previously hunted in Namibia and hadn't managed to connect with a trophy kudu....... 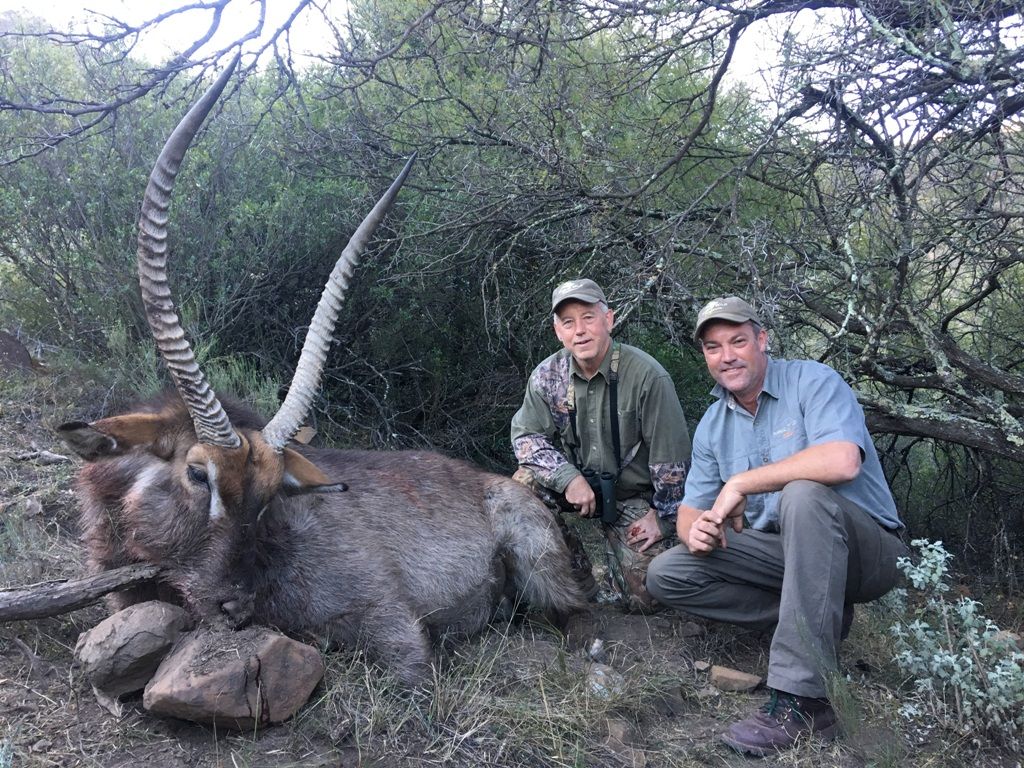 Kudu was at the top of his wish list along with eland, nyala and bushbuck. It promised to be an exciting hunt! He shot with my Sako .270 and used my .375 Ruger to hunt eland.

As always I expected the kudu would be the toughest animal to hunt and we began the first morning looking for a nyala to ease Mark into his first hunting day. We hiked from camp and were unlucky not to take a beautiful nyala bull that was feeding next to the brush line. He busted us and retreated to the safety of the acacia thicket. We hiked a few hundred yards further and spotted an impressive kudu bull mingling with some cows against a ridge line. We descended into the acacia thicket and manouvered into a position below him. We were able to hike unseen to the back side of the ridge. Using some dead ground between us we stalked to within 250 yards along the ridge below where the kudu were browsing. Mark set up for a sitting shot and bided his time, waiting for the bull to present the perfect broadside shot. The brush around him was high and we knew it was unlikely we'd get a full view of his shoulder. The bull moved 10 yards forward, exposing the top half of his shoulder and Mark's shot echoed across the valley. The kudu ran just a few yards before kicking and expiring in a cloud of dust. He was a fantastic kudu specimen and I was overjoyed for Mark. He'd put the kudu bogey to rest on his first morning.

Early the next morning we headed south to the coast for bushbuck. Lindsay and Deborah spent the day in the Addo Elephant Park and had lunch at the beachfront in Port Elizabeth. The wind was blowing and we knew hunting bushbuck in these conditions wasn't going to be easy. Early on we spotted several bushbuck on the edge of the brush line from afar and moved closer to investigate. They were all too young. One was clearly long enough but he wasn't the old type of black bushbuck we were searching for. After lunch we headed further inland where the wind seemed to have died down. We spent the best part of an hour glassing a valley. We were moving to another spot when we spotted two rams and a ewe in an open field below us. We stopped the vehicle and walked quietly down the road. The largest ram was an old one. He was lying down and we set the shooting sticks up with the intention of waiting for him to stand up. He stood up and without pausing began following the ewe who was heading for some thick bush below us. Mark didn't hesitate and his bullet hit the ram mid -walk in the top of the spine. He'd taken a fine bushbuck ram. What an incredible instinctive shot.

We resumed our search for nyala the next morning. There was a fog hanging in the air and visibility was poor. Around mid morning, Mitcell spotted several nyala bulls and ewes on a slope. We stalked up on them, the largest moving in behind some bush high against the ridge. When he eventually emerged, Mark made an incredible shot. We only needed an eland now to complete Mark's spiral slam.

We headed north the next morning to a concession where we planned to stay over at a lodge for two hunting days. Lindsay and Deborah joined us later that day. We were in search of eland and around mid morning we spotted a small herd coming out the bush and climbing out the wide valley floor. We were 2 miles away but we drove in their direction, using a mountain track to get closer. We  walked slowly along the track for several hundred yards, carefully moving around a herd of zebra, before we spotted the bachelor herd of eland bulls above us. They moved diagonally to their left, across a slope disappearing beyond a "koppie". We continued along the track in the hope that we'd sight them on the other side of the "koppie". We were just coming around into view when inexplicably they doubled back and were heading back along the route they'd come on. We hurried back along the track and when they paused above us we identified the oldest bull. Mark fired twice, his first a little far back, the second perfectly on the shoulder and the bull crashed into the mountain slope. He was a big eland and we radioed for help retrieving him. What a hunt.

With his spiral slam now complete, Mark decided he'd like to hunt a waterbuck. After lunch, we headed back to the area where we'd shot the eland. The crew who retrieved the eland for us had seen two waterbuck bulls in the area. We soon spotted several waterbuck with a few bulls around them. They were all a little young and we decided to try a different area. The sun was setting when we came upon a young waterbuck bull on the slope above us. We hid the vehicle and watched closely in the event that there were more waterbuck in the area. When a second waterbuck popped his head up next to the younger bull I instinctively knew he was one of the largest waterbuck bulls I've ever laid eyes on. Trying to keep my excitement in check and not wanting to get Mark too worked up about this monster waterbuck bull in front of us, we slowly moved  to where we had a clear shot. He turned slowly and Mark must have know he needed to shoot or he'd lose this waterbuck forever. The shot made a distinctive thud and the waterbuck took off, scrambling up the slope at first and then veering to his right towards some cover. We climbed the slope frantically to the spot where he disappeared. We found no blood but we knew he was hit. Our tracker whistled to us and in a clearing 300 yards to our right stood the waterbuck bull. Out of breath, blood pumping in our heads, I urged Mark to make a shot. Hit him anywhere I might have said. The shot connected somewhere because he tumbled forward and then stood up again running into some thick bush beneath him. We found blood when we and followed it for a way before we heard him jump up in the bush ahead of us. He was struggling and we changed the angle to get a better shot. Mark's third shot put him down. Out of breath and our blood still pumping with adrenaline, we sat there for several moments absorbing the moment. He later measured out as the longest and widest waterbuck ever taken on our concession and the largest Karoo Wild Safaris has ever hunted. We almost lost him. We had a few heart stopping moments. I told Mark his hunting life up to now had been too easy and we were bound to run into an animal that truly tested us.

With our hunting adventures complete, we all spent the day in Graaff Reinet visiting the museums and enjoying a day of sight seeing and shopping.

A remarkable hunt had come to an end. This was one of my favourite hunts. We enjoyed our time with Mark and Deborah and hope we'll see our new friends in South Africa again someday

What a great time we had on our recent trip to South Africa. I have hunted in many places and no doubt our hunt at Karoo Wild Safaris was the greatest. The quality and abundance of game, the great accommodations and most importantly the excellent friends we have met made this a trip of a lifetime. Thanks for being such great hosts and we will keep in touch.