Ferdinando and Eleonora, from Italy, joined us early in the New Year for a short summer hunt. Ferdinando has hunted many times in Africa before and we were happy to welcome him on his first hunting trip to South Africa. 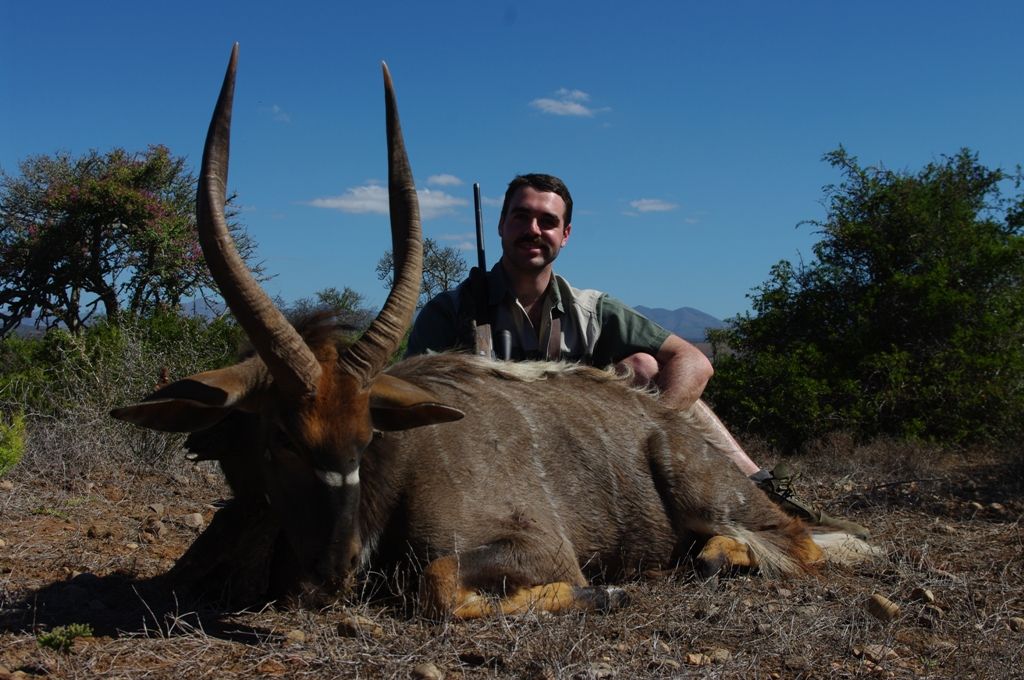 Ferdinando hunted with my Sako .270 with 130 grain Pro Am rounds. On the first afternoon, a thunderstorm rolled in and we had to race back to camp to avoid being cut off from camp by the rivers coming down. The next day was spent in search of nyala. With the dry summer conditions far from over the nyala were feeding in dense bush making hunting very difficult. We saw a number of nyala bulls but passed on them all.

On the second afternoon we were en route to a high vantage point in searing heat to glass for game when we spotted a nyala bull feeding in the bush beside the road. We drove on a short distance and walked back to a spot where Ferdinando could made an easy 100 yard shot. Considering the hunting conditions, it was a hunting gift we were happy to accept.

Hunting blesbok proved every bit as tough as expected and we were high in the mountains when we bumped a big blesbok ram. He took off at break neck speed and Mitchell, Ferdinando and Eleonora followed on foot while I drove down and around the mountain. They followed the ram's tracks for a couple of miles uphill before they again bumped a smallish bachelor herd. Ferdinando made a hasty shot to take a good blesbok ram.

Our search for mountain reedbuck came to an abrupt end that afternoon when another thunderstorm rolled in catching us high in the mountains. Now drenched, we hastily made for the safety of the vehicle below.

It was raining on the final morning of the hunt but we decided to try for a bushbuck nonetheless. We spotted a very nice ram early that morning but he browsed into some thick bush. We waited patiently but he never emered again. The rain became heavier and we headed back to the lodge for an early lunch. We hunted a different area of the property that afternoon but only spotted a few young rams. With last light we returned to the spot where the big ram had disappeared and we soon spotted him feeding near the same spot. He was browsing bush to bush 200 yards below us and he made his was through a thick clump of bushes to emerge momentraily in a small clearing. Ferdinando set up quickly and fired. The shot missed and the buck disappeared again. We went down to the spot where he was feeding to make sure the shot had indeed missed. Five yards from the spot there was a loud hiss as a large puffadder gave us a stern rebuke for disturbing his peace. We were taken off guard and quickly back-peddled.

Ferdinando left without a bushbuck but vowed to return again for a bushbuck hunt. We enjoyed Ferdinando and Eleonora's company and easy going nature and hope to welcome them back to the Karoo in the future. It was a great start to 2017!