Phil and Pat from Corvallis, Oregon chose to hunt with Karoo Wild Safaris on their first African hunting trip. Phil is a professor of geography and climatology and Pat is a travel consultant. Phil and Pat had been planning this trip for over... 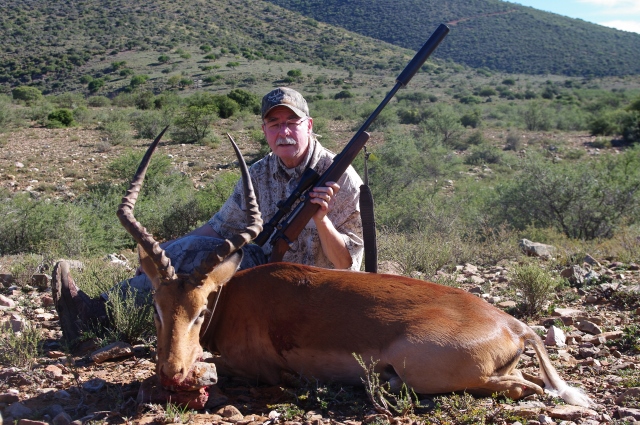 I met them late that afternoon at Port Elizabeth airport and we arrived back at the lodge as the sun was setting. That evening we enjoyed a delicious dinner and we turned in early in anticipation of the next mornings hunting.

Phil had chosen to use my Sako .270 as he didn't want the hassle of travelling with his rifle on the non-hunting portion of the trip. He got acquainted with it on the range and we set off in search of trophy and some non-trophy animals that Phil had chosen to hunt. We soon came across a nice impala ram that took cover along an acacia lined riverbank and gave us the slip. We decided to follow him and after a patient stalk and wait at a position above him Phil dropped him with two shots. A beautiful impala ram was the start to what would be an amazing day of hunting. We took photos and took him to the skinning shed before we set off in search of hartebeest. We took a mountain 4x4 road and put in a stalk on a large herd but we never managed to get closer to them. As midday was approaching, we decided to head back to the lodge. Not far from the lodge we came across another large herd near the waterhole. Phil took an old female with long horns. It turned out to be a good non-trophy cull as she was nearing the end of her life.

The next morning we set off in search of gemsbok and after spending a few hours searching for a bull, we identified a herd with a couple of nice gemsbok bulls. We put in a long stalk and with very little cover we made the most of the conditions and got within 200 yards of them before they got nervous and emerged single file from cover. We chose the best bull and Phil hit him just back of the shoulder. He went down, we went closer, he got up and took off at a surprising pace before Phil put him down. A nice gemsbok bull!

That afternoon we hiked from camp and put in a long stalk on a bachelor herd of blesbok. With little cover to approach closer, we waited patiently for a couple of hours for them to graze closer. With sunset approaching we decided to throw caution to the wind and we stalked closer. We got within range before they spotted us. Phil shot the ram we had indentified as the biggest in the group. A nice old ram with horns yellowing with age.

Early the next morning we travelled to a concession and after some time we stalked closer to a herd of black wildebeest. They sensed something was amiss and snorted and jostled as they tried to identify the threat. Eventually they set off and in typical black wildebeest style they doubled back and milled around. Phil took his opportunity and downed a large cow with a shot to the vitals. A family of warthogs emerged from their hole where she fell and almost knocked over the lead tracker.

With Phils trophy list complete we spent that afternoon relaxing around the lodge. The rain set in that evening. Phil decided he'd like to get a warthog boar and we looked for one the next morning but the rain was persistent and the warthogs scarcily emerged from their holes.