Paul from the UK joined us for a 10 day hunt for some lesser hunted species and some plains game not taken on previous trips. He had hunted before in Cameroon, Zimbabwe, Tanzania, South Africa.... 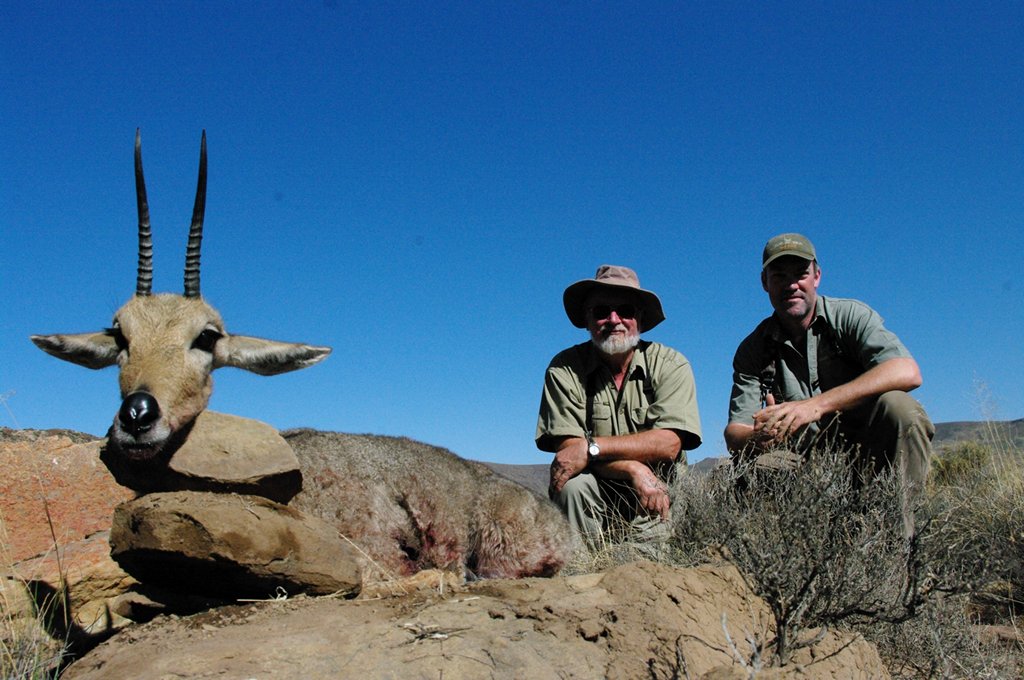 Paul's hunting ethic is to hunt wherever possible hunt old, solitary male animals regardless of horn length. It was an ethos we were able to follow for a large part of the hunt.

After a short range session, we set out late that afternoon and put in a stalk on three wildebeest. Paul's shot hit the oldest bull high on the shoulder and he went straight down. It was a good start which was to only get better in days to come.

Driving on a mountain road early the next morning we unexpectantly bumped into a solitary klipspringer ram. We hiked down the road and waited patiently for a clear shot as he perched 140 yards above us. A difficult frontal shot allowed Paul to take a good klipspringer ram. After lunch we searched the Karoo plains for steenbok. Paul quickly spotted one and a good one at that. A short stalk and a beautful steenbok ram was taken. Late that afternoon we spotted a small herd of mountain reedbuck. The ram was running at the back of the herd and paused long enough for Paul to make a terrific shot. It was an exceptional ram, the largest we've ever taken. He will surely feature near the top of record books for Southern Mountain Reedbuck. We ended a successful day with a meal roasted vegetables and eland sirloin barbecued on the fire.

Our incredible run of hunting luck came to abrupt end as we searched for common duiker all of the next day without success. Normally plentiful in our area the full moon conditions had them feeding in thick bush, making them difficult to spot. The next day we headed north to higher elevation where vaal rhebuck prefer the open mountain slopes. The wind was howling and although we saw several rhebuck, the conditions didn't allow us to get close to them. We spent that night at Abbotsbury, a lodge north of Graaff Reinet. With the wind set to continue blowing we decided to try a different area for vaal rhebuck the next morning. Hunting conditions were still difficult. We ascended a high mountain via a 4X4 track and soon spotted an old blue wildebeest bull grazing on a plateau. As we got close on foot, he scented us and running out of sight over the mountain edge. We were returning to the truck when we we spotted him running full speed in our direction. Several hundred yards away he was running directly at us. A hundred yards out we were slightly bemused and a little unsure of his intentions. Paul wasn't going to wait any longer and a volley of shots later the old bull crashed down. His horns and teeth were totally worn out, an old bull at the end of his life. Why he returned to offer himself to us will forever remain a mystery. Who can pretend to understand the depths of a wildebeest's mind. Later we saw a old waterbuck bull lying down right at the very top of a mountain section. We drove to a point beneath and snuck up behind him to within 50 yards. What a bull he was with exceptionally thick bases and worn down horns.

The following morning we searched at for vaal rhebuck reaching heights of 6000 feet above sea level. Our search was in vain and we returned to the lodge empty-handed. We travelled south to the coast the next morning to hunt caracal with dogs. The dogs picked up caracal scent throughout the day but it was later in the morning when they were able to tree a tom.

Common duiker continued to remain evasive and Paul and I decided to search again for vaal rhebuck. Our perseverance finally paid off when we spotted a herd of eight rhebuck enjoying the morning sun on a mountain slope. We stalked as close as we could given the open terrain. We set up and Paul bravely chose to attempt the 300 yard uphill shot. The shot hit right behind the shoulder the rhebuck ram tumbled down. Without doubt it was one of the most difficult shots I've ever seen anyone make. It was the ideal culmination of several days of searching for rhebuck. Relief and satisfaction that we could overcome the challenge of hunting this elusive antelope species.

The following day was a duiker-less day again. Strange how we can hunt a selection of the most elusive species in Africa in one hunt, only to be outfoxed by one of the commonest, the common duiker...

We did however put in a long stalk on three black springbuck. Our focus was on the springbuck ahead when I stepped over a huge puffadder. It hissed loudly and Paul narrowly avoided standing on the venomous snake as it slid between us. We paid special attention to the ground ahead as we covered the distance to get within shooting distance of the springbuck. They were moving slowly uphill when we set up but Paul's shooting confidence was up and he hit the ram perfectly as he was moving behind cover. What a great trophy and a superb end to a fantastic hunt.

This was the last trophy hunt of 2017 and what an interesting one it turned out to be. The smaller, less-hunted species often make the most challenging and rewarding hunts. Thank you Paul for hunting with us in the Karoo!