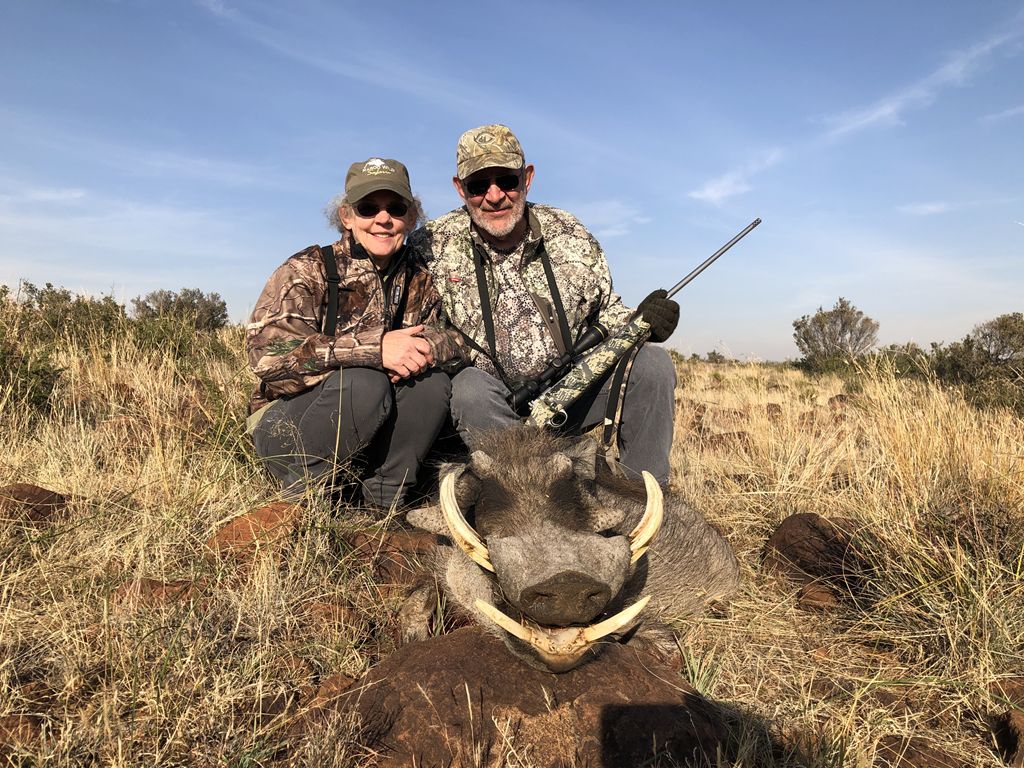 We missed out on a gemsbuck last year and passed on a sable to focus on buffalo so those two species were high on Pete's list for his 2019 hunt.

Pete is a true gentleman and character and I enjoy hunting with him immensely. Despite my best efforts to inform and educate him, he still has no appreciation for the great game of cricket. It's unfortunate but we have many other common interests to chat about whilst hunting. This year we had another exciting hunt ahead.

Day one we focused on gemsbok early on and we soon came across several small groups. We made a stalk on three buck in the distance and were able to get within 160 yards. We aimed for the longest horned one and Pete's shot was good. The gemsbok walked slowly off into the bush, clearly hit hard. We followed but there was significant distance between us and we lost sight of the gemsbuck for a long period. There was no blood trail to follow and we were lucky to bump the gemsbuck at 120 yards lying in some bush. Pete sent through a volley of two shots which hit true. What a hunt! We were both relieved. There was no blood trail and there were times when we both harboured doubts of ever finding the gemsbuck. The afternnon proved fruitful as well. Pete, Peg and stalked a magnificent red hartebeest bull. The shot hit, the bull bucked and stumbled to the left out of sight. We looked for blood in vain and followed his tracks until they intermingled with the tracks of other hartbeest. We spread out at this point trying to picture every scenario. Doubt had just beagn creeping into our minds when our saviour Peg whistled that she had found the bull expired. He was found 150 yards from his original position directly to the right, in the opposite direction from which we saw him move after the shot. He must have stumbled left and then doubled straight back unseed behind a clump of bush. Peg you champ!

We travelled north to a game reserve concession for a few days of hunting. On arrival we got some information on the whereabouts of good sable. We set off for that spot after lunch and we glassed the area and spotted some sable lazing next to a dry river bed. We hiked closer and could indentify a big black bull amongst some younger bulls and cows. He had a magnificent spread and good length. We moved diagonally to get a clear view of him and Pete's shot hit true. He bucked wildly and ran off at pace across our field of view. Fortunately he was in view when he inevitably slowed down from the effects of the bullet and Pete made a telling shot to put the sable down. He was an old bull, in his prime.

With a strong cold fron set to roll in the next day we wanted to make use of the remaining good hunting weather we had left in the day and we drove around the large open plains of the reserve looking for warthog, blue wildebeest and lechwe. Siya rapped on the truck's roof to signal that he spotted some lechwe in the distance. It's relatively easy to judge the horn length of lechwe so even at several hundred yards away, it was evident that there were some good trophy bulls in the herd. There was dead ground to our right that we could use to sneak up on them and we backed up and got into it, closing the distance to 200 yards. The second bull from the left appeared to be the pick of the bunch and Pete's shot was again true, the lechwe running a short distance before expiring from a heart shot. A great afternoon of hunting had come to an end and we retired to the lodge to a large fire and warm meal.

The wind was blowing hard the following morning and we knew the hunting was going to be tough. By 10am we had hadn't seen a blue wildebeest or warthog. So I was surprised when we spotted a warthog retreating into a clump of waist high bushes ahead of us as we drove up a jeep track. He looked like he had a good set of tusks so we backed up out of sights and flanked him to the right to come from his downwind side. He was lying in the bush, biding his time, waiting for our pick-up to pass on by. Pete loaded a round and took aim. The pig must have sensed something was amiss beacuse he set off on a trot. I whispered to Pete to shoot and at 80 yards his first and second shot hit the warthog. He was truly a magnificent warthog. A very unexpected trophy as we seldom see warthog in this area. We were a full hours drive from the lodge so we decided to return for lunch. On the way there the track winds through a series of granite covered hills leading up to a plateau. It was at the base of one of these granite hills that we spotted a blue wildebeest bull. The only bull we saw that day and good one at that. We set off quickly and had to make a hasty 250 yard shot as he saw us and was about to make a run for it. What a shot. I could see the shot hit him centre shoulder yet he still managed to dash 250 yards before hitting the ground in a cloud of dust. Could the day get any better?

It did late that afternoon. The sun was almost down when we spotted a bachelor herd of roan antelope grazing out the wind against a hill. We approached downwind and managed to stalk within 140 yards. We chose an old roan bull with nice long tips, parallel to the ground at the end. The first shot was a little far back and the bull was struggling when he crossed an opening moving away from us. We scrambled to get into a position to get a clear shot. Hastily I set up the shooting sticks and Pete made a great shot to put the roan down. He was a good trophy indeed.

We returned to Karoo Wild lodge the next morning and spent the day relaxing at the lodge.

Having hunted some of the larger plains game Pete decided he'd like to hunt some of the smaller species. Over the course of the next three days we successfully hunted a cape springbuck and two colour variants, a black springbuck and copper springbuck. Pete's impecable markmanship continued and he also shot a beautiful steenbuck ram.

At the end of the hunt Peg presented me with a hand knitted, specialized pair of buffalo socks to wear when sneaking up on cape buffalo. It was a very thoughtful present and one which I will certainly make use of. Pete and Peg - thanks for the memories and excellent company!