Gerald and Jim, father and son, from Cincinnati and Chicago joined us for a seven day safari. It was a pleasure to welcome them to Karoo Wild Safaris on their first African Safari. We were sincerely impressed by Gerald and Jim's hunting ethos of enjo 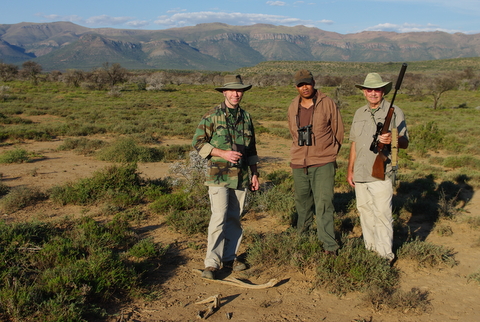 Jim took a good zebra stallion on the second day of the safari. Blustering winds on the first day made it difficult to get a good stalk in and much of the day was spent getting in close only for the wind to change and spook the animals on the last part of the stalk. We were rewarded for our patience and after a lengthy stalk and long periods of waiting, Jim made an impressive shot in fading light. We chose to skin the zebra by torchlight rather than haul the heavy animal out the ravine in darkness.

Gerald took a good blesbok and impala ram. The blesbok stalk proved challenging. This particular herd had chosen an open mountain side to lay up and we began the stalk uphill from camp. Unsighted for most of the way, we only had a few sparsely scattered jacket plum trees to rely on as cover for the last 100 yards of the stalk. Gerald made a challenging uphill shot and had his blesbok. The impala ram proved easier. We put in a good stalk from the rear of the large herd. Oblivious to our presence behind them, Gerald dropped a fully grown ram in it s tracks with a well placed shot.

We left early on Thursday morning, the vast Karoo plains opening up as we ventured further inland into arid gemsbok country. Gerald made an excellent shot in a strong breeze and bagged an old gemsbok bull. After a picnic lunch by a windmill, Jim was rewarded with an old gemsbok cow with an exceptional set of horns. We all enjoyed the day hunting in different terrain and making new friends along the way.

Jim took a good blue wildebeest in the Kleinpoort area. We spotted a bachelor group of three wildebeest early on in the hunt and decided to stalk closer. Jim put in a seemingly perfect from 140 yards. Being notoriously tough animals, the bull took the impact of the lung shot and kept progressing downhill for a mile. We followed his blood trail and an hour later Jim got another shot in on him.

Gerald took a zebra stallion at Haaspoort. We spotted the herd from cover above and put in a slow downhill stalk. Gerald made a heart shot to down his zebra.

We spent an afternoon in the "Grootberg" (big mountain) and Jim was rewarded with a nice kudu bull ambling down the mountain to browse the sweet acacia trees along the river course below.

Saturday was spent in the Camdeboo mountain area hunting warthog. We spotted several old boars but passed on them because their tusks were too worn out. In fading light we had a close encounter with a white rhino and her newly born calf. Having heeded her warning grunt in good time, we froze in our tracks and were rewarded with a 10 yard photo shoot before retreating.

As a family we were touched by Gerald and Jim's kind and compassionate nature. We wish them both well and are grateful to be in this business which allows one to make lifelong friends with complete strangers one meets at the airport in the middle of the night...