Redgie returned to hunt with us on his 2nd African hunting trip. On his wish list this trip were nyala. kudu, eland, gemsbuck and zebra. Redgie hunted with his new Sauer 300 Win Mag... 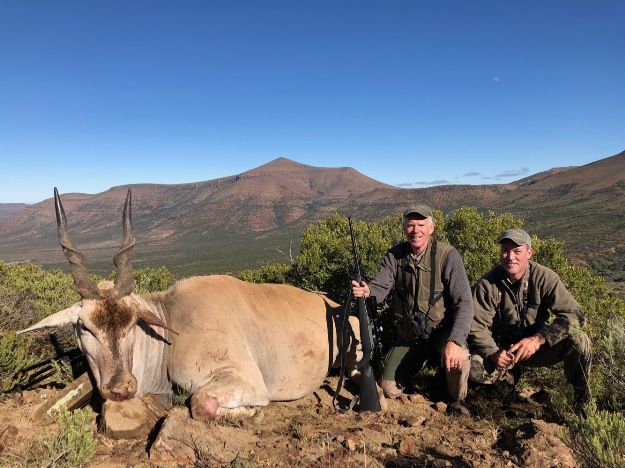 The morning began with us hiking from camp on the lookout for kudu and nyala browsing on the acacia thickets along the river. After a couple of hours we spotted a nyala bull walking from the thicket across a plain. We used the undulations in the terrain to stalk closer and Redgie make a quick 100 yards shot to get a terrific old nyala bull.

Later that day we snuck up on two impala rams sunning themselves on a cold winter's day. Redgie made the 160 yard shot with ease. The 180 grain bullet hit the ram front on and he ran a few yards before expiring.

The following day saw us hiking high in the Winterhoek mountains in search of a kudu bull. We saw several big kudu bulls but couldn't close the distance to make a shot. We spotted a particular bull bedding down in the distance and returned to that same spot in the afternoon. He must have heard us approach and he jumped up, running down a valley and out a steep slope on the far side. Redgie set up on the sticks and fired as he paused to climb a rocky section. It was a difficult shot and unfortunately the shot missed. Nevertheless, we enjoyed the day spent hiking in beautiful mountains.

It was raining the next morning and it didn't look promising for kudu. We set out to hunt a different area. As we were driving into a valley I spotted a herd of kudu in the distance. We hid the vehicle and with a direct approach not possible without being spotted, we decided to hike around and approach the herd from the opposite end. An hour later we were 400 yards out from the herd. two big bulls amongst the cows. We had very little cover left and we waited for them to graze behind a small outcrop before we moved closer. Scaling the outcrop, we knew we would come out almost on top of them and that it was going to be tight. Tight it was. As we reached the summit, I spotted the tips of one of the bulls and we ducked down. We set the sticks up and waited patiently for him to look away before Redgie could stand up and shoot. The sound of the 100 yard shot thudded back and we knew the bull was hit hard. He ran 50 yards before crashing down in a cloud of dust. What a hunt that was. There are few hunts more exciting than a cape kudu hunt.

Paul, the cameraman, joined us the next day for the last part of the hunt and we headed north for a couple of days hunting a concession. We passed on a large eland bull leading his cows across a plain and headed for the foothills of a large mountain. Michale spotted a bachelor herd of 12 eland bulls high above us and we used the riverine brush to close the 1000 yards between us. They had disappeared in some bush above us but we guessed the direction in which they were browsing and set up in wait. When they appeared, we realized we'd underestimated the shot distance and an easy 200 yard shot was now a tough 300 yard shot. Redgie dialed up his ballistic reticle to 300 yards and made an incredible two shots. Both shots hit the eland bull in the vitals, just inches apart. He disappeared from view but we followed and found him expired 100 yards away. What a magnificent eland trophy!

That afternoon we got into the thick of it with the gemsbuck. There were herds of them bedded down on the the side of a mountain and we hiked up into it. We set up on a nice bull and waited patiently for a clear shot. Redgie's shot unfortunately caught a piece of brush in the line of fire and the bush exploded with gemsbuck heading in every direction.

We looked in the same area the next morning and although we saw several gemsbuck, we couldn't get into a decent position to make a shot. We had some encounters with elephant and giraffe and Paul was able to get some excellent footage. That afternoon we got onto a herd of zebra on an large open plain. We used some cover to good effect and found ourselves in position 150 yards away. Redgie's shot flew high and the fled for the cover of the bush line. We headed back to our lodge that afternoon.

Early the next morning we were again onto some zebra. We watched them descend a mountain and followed them for several kilometeres struggling to keep up. They slowed to climb a slope and we moved around and above them waiting patiently for them to move up to our position. Redgie took his chance and made another great shot to take a gorgeous zebra stallion.

Thanks Victor for another remarkable hunting adventure.  Last year was my first time hunting Africa with Karoo Wild Safaris and it proved to be more than I expected with the number of animals we were able to hunt. This  year  I had  5  different trophy animals on my wish list along with some cull animals. The hunting was not only challenging but tested my endurance and shooting ability. The spot and stalk hunting style with Victor is what real hunting in Africa is all about