Scott from Houston, Texas returns to hunt with Karoo Wild

We were excited to welcome Scott back in camp this year for an 8 day hunt. We had a lot of fun hunting with Scott last year and this year's hunt promised to hold more hunting adventures. Scott used my .375 Ruger caliber Howa with 200 grain GS... 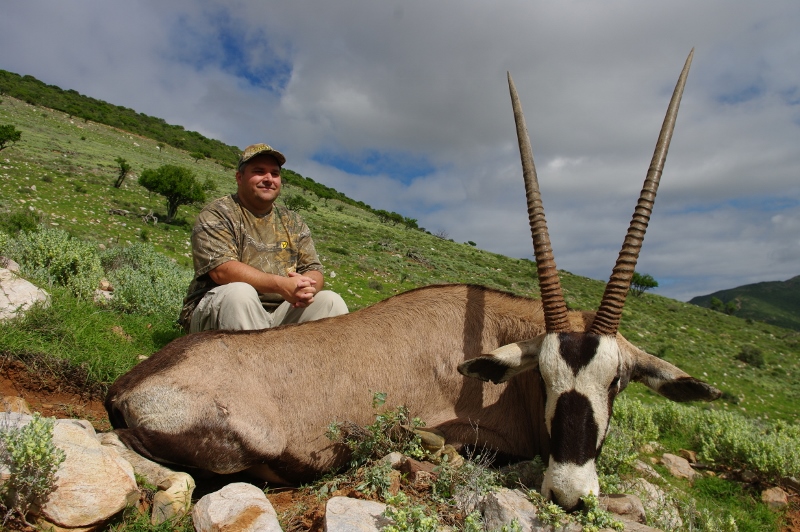 On the afternoon of Scott's arrival we went in search of common springbok but came up empty handed. As the light was fading we decided to walk through the last open plain before camp. A short distance into our walk we bumped a black wildebeest bull who ran a large circle to stand a couple of hundred yards away grunting warning sounds at us from afar. Scott fired the .375 putting him down with one shot. He was in awe of the .375 Ruger's performance. Scott had taken his first trophy of 2015, a magnificent black wildebeest bull.

The next morning springbok eluded us once again but we were lucky to bump into a lone gemsbok bull grazing on the slope ahead. Scott and I put in a stalk while Mitchell, the tracker, stayed with the vehicle and acted as spotter. The bull was high up and with his good vantage point of the slope below he spotted us setting up and ran a short distance. I ranged it at 270 yards and Scott wasted little time in making the shot. The bull took of and disappeared out of sight. I didn't hear the tell tale thump of a bullet hit and was convinced that Scott has missed. Dejected we returned to the truck to get a better view of where the gemsbok had ran too. We were elated when Mitchell told us that the bull had run no more than 50 yards before expiring on the slope ahead. Scott had hit him perfectly on the shoulder with a through and through shot. That afternoon we were bombarded by a large herd of black springbok. Like sardines in the ocean trying to confuse a predator they ran straight at us, fanning out at the last moment to add to the confusion. Scott bided his time and adeptly kept his focus on the targeted ram. When he stopped at 250 yards plus, he put him down with a shot to the neck. A great day of hunting was rewarded with barbecued impala sirloins.

The next day we were soon onto a big sable bull. He sensed that our focus was on him and he neatly followed the acacia lined wash. We followed until he settled into a thick acacia stand. We waited patiently for him to graze into the open but he never did and came hurtling out. He wasn't going to stop for the broad side shot we were looking for. Scott's shooting confidence was on an all time high now and he hit him in the vitals whilst the sable was walking. Scott had a magnificent sable bull! While the staff skinned the sable, we went to scout for red lechwe bulls.

We returned to the salting shed and while the staff were attending to the trophies, we went in search of a springbuck ram. We spotted a bachelor group of rams grazing peacefully in the distance and with the harsh african sun setting behind our backs, we fancied our chances of getting close to them. With almost zero light remaining, we were in position and knowing how difficult springbok stalks can be we decided to take the opportunity gifted to us. We chose a good ram and Scott hit him, only for him to run a short way off before he put him down with a follow up shot. Today we were blessed with good hunting memories.

Early the next morning we went in search of white springbok. After some time spent identifying where the dominant rams were we chose a good one and started our stalk. With sparse cover, the stalk was treacherous and the ram was edgy, moving constantly away from us. We took cover and waited for him to move into our field of view. When he did, Scott took his chance. He hit him a little far back and the wounded ram ran downhill. We followed at a steady pace until he stopped and Scott got in a telling second shot. With the white springbok Scott had taken the 3 natural springbok colour variations.

We left at 5am the next morning to hunt bushbuck at the coast. We were looking for an old ram and passed on several rams. Walking on the edge of the coastal forest we spotted a big ram that had ventured into the open for a bit of midday sun. We stalked closer and set up at 180 yards. The ram was moving as he browsed and the shot was precarious. We decided not to risk a missed shot and endeavoured to get as close as we could. We dropped below him and stalked with the wind in our faces, each step deliberately taken as not to make a sound. Fifty yards out he had his back to us and we set up. The animal instinct that had kept such a precious ram alive for 8 years kicked in and he swung around. But it was too late as Scott put him down with a well placed shot. It was a day of calm, calculated hunting. Passing on several younger rams we stuck to our plan and got the ram we wanted with a textbook stalk and shot. With the older rams taken out of the system, the goals of hunting and conservation merge seamlessly to the benefit of both.

That afternoon we hunted near the Fish River in search of warthog. Although we spotted several warthog sows and boars we didn't spot the big boar we were looking for.

The next day we headed back to the area where we had hunted sable. The goal this time was one of the big lechwe rams we saw in that area. We soon saw a big bull and followed him into an acacia wash only for him to disappear entirely. We searched the area for several hours  and late in the afternoon we spotted him with a small herd of cows that he had joined. We followed him and got within shooting range but he didn't present the shot that we wanted. Scott wasn't deterred and he put him down with another superb shot. It had been a long, tiring day but Scott had taken a magnificent animal as reward.

It had been a hunt characterized by chances taken through outstanding marksmanship. It's a reminder on how important that first shot on a safari is on the shooting confidence of the hunter.

Thanks Scott for another amazing time spent with you in the "veld". We had lots of fun and hope to see you soon! All the best in the meantime

Thank you karoo wild safaris  for another fantastic hunting holiday. Yet again you have given me super trophies and amazing memories. I just can't comment enough on how great an experience you provided. Everything from the hunting to the accommodations is always top notch and continues to exceed my expectations. I have truly found friends in South Africa. I can't wait to see everyone again next year!