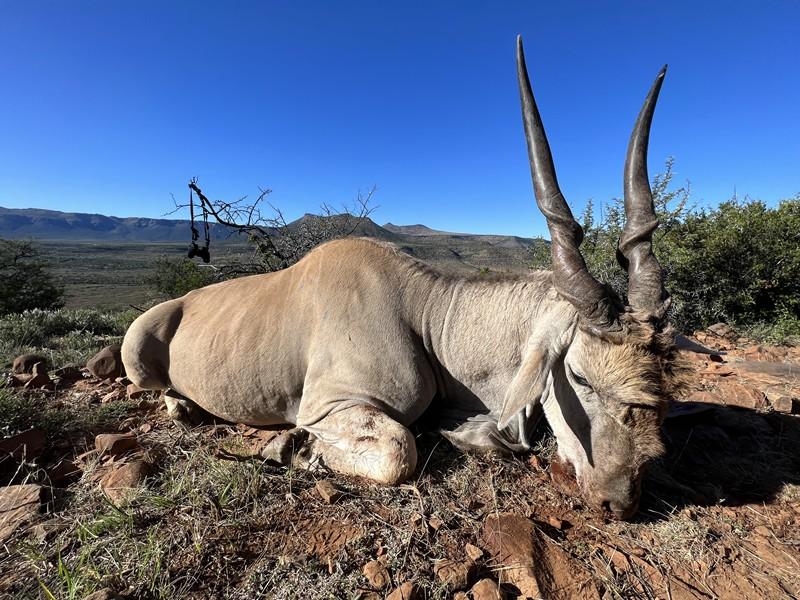 Hunting in South Africa is particularly good in May during the mating season. Three couples from Latvia booked an 8 day hunt with us. Andis, Arnis and Guntars were accompanied on their first South African hunt by their partners, Una, Diana and Signa.

Andis was guided by myself using my 7x64 Brenneke as his hunting rifle. This was Andis's second African hunt. Having previously hunted in Namibia on a plains game hunt and taken blue and black wildebeest and blesbok, top of his wish list were kudu, nyala and eland.

Our hunt got off to a terririfc start. Andis hunted a sable, impala and common duiker on the first day. Whilst having breakfast the next morning, my tracker spotted a beautiful nyala bull from camp. We made short work of the remainder of our meal and had a nyala bull down down shortly before sunrise. Late that same morning while out searching for red lechwe, we spotted a big kudu bull sunning himself in a small depression in the hills. Kudu hunting is always a challenge and Andis seized his opportunity to take a magnificent kudu bull.

Andis shot a black springbok on the plains north of Karoo Wild Lodge on the third morning. The next day we moved camp to our satellite lodge near Graaff Reinet for two days of hunting. The ladies enjoyed seeing elephant and white rhino near camp and the hunting was challenging but fruitful. We spotted a waterbuck bull on the first morning. He got into the thick stuff near the river and although the recent rains allowed us to track him for several kilometres downstream, he outsmarted us in the end. It was a gruelling morning of tracking and we had a well earned rest at lunch enjoying the view of the Camdeboo mountains in the background. That afternoon was surreal. Andis shot a magnificent lechwe bull shortly after lunch. The sun was setting fast on day four of Andis's South African hunt. We'd had an unexpected amount of luck and to spot and stalk a waterbuck bull in the dying African light was perhaps expecting too much.

The abundance of plains game in South Africa allows a hunter many opportunities early in a hunting safari. As the hunting list becomes more focused, the opportunities naturally diminish. We were hunting eland and saw many species that morning, eland however eluded us. We stalked a bachelor herd of eland bulls and were within 150 yards of them when the wind shifted. The clattering of hooves echoed through the mountains and the eland escaped, running several kilometeres across the valley, disapearing into thick riverine thicket. We returned to Karoo Wild Lodge that afternoon.

The following day we went bushbuck hunting. Bushbuck hunting in South Africa is a patient man's waiting game. We saw several bushbuck ewes but it was much later in the afternoon when three young bushbuck rams appeared in the open plain below us. The sun had set and our chances were dimishing with the dying light. I decided to stalk the young bushbuck rams just to give Andis and Una an opportunity to see bushbuck up close. We were in the open and within 40 yards of them when I decided to glass the edge of the bush one last time. I consider myself a calm natured hunter but my heartbeat peaked when I saw an old bushbuck ram emerge from the thicket and squeeze under the cattle fence 90 yards ahead of us. I dropped my binoculars and frantically set up the shooting sticks for Andis. It was dark and the bushbuck was invisible to the naked eye. Thanks to modern day optics however Andis was able to locate him in my Leupold riflescope. His shot hit the bushbuck square on the shoulder, completing one of my most exciting days as a hunting guide.

We were committed to getting Andis a good eland and were fortunate to spot a small herd early the next morning. It was a tricky stalk, the wind was swirling and there was an abundance of baboon around to betray our position. On the final part of the stalk the wind finally betrayed us and the eland fled uphill diagonally away from us. The chosen bull paused for an instant and Andis dropped him with a shot to the shoulder.

Andis concluded a remarkable South African hunt by taking a copper springbok ram the next morning.

Arnis's hunt was mostly a nocturnal affair. It began well with him finding a magnificent cape grysbuck on the first evening. Truly a remarkable and elusive trophy to add to his collection of Tiny Ten plains game animals. The next evening we were lucky to connect with a bat eared fox and spotted genet. These are small animals and Arnis's shooting was pinpoint accurate. A black backed jackal jumped out in front of the hunting vehicle and we spent the next hour trying to locate him. My merino sheep lamb in this area and jackal prey heavily on them. This cunning jackal was able to elude us... for now.

Arnis, Una and Arnold hunted in the Graaff Reinet area ovet the course of the next few days. Arnis was able to take a rare aardwolf, a cousin of the spotted and brown hyena. Early the following morning they joined a dog pack which treed a caracal later that morning. Arnis shot him out the tree with the 308. Caracal are notorious sheep killers and a hunt such as this had duel benefits as a trophy and vermin hunt. They hunted vaal rhebuck that afternoon. After a missed opportunity, their chances seemed low but Arnold decided to glass an area where he hunted a vaal rhebuck before, hoping another ram would have moved in to replace him in the breeding season. Their African hunting luck continued and Arnis finished his hunt in style. He had a difficult plains game hunt and to take so many rare species in one hunting trip was an exceptional effort on both the part of the hunter and the guide.

Guntars had a relaxing hunt often accompanying Andis on his hunts and taking in the African hunting experience as an observer. He hunted an impala ram on the first day. Later on in the safari he took a steenbok, blesbok and several vervey monkeys.

I'm proud of how our team at Karoo Wild Safaris were able to pull of such a multi area, multi species plains game hunt. We hunted hard at times and also had plenty of special moments around the campfire. Thank you to our Latvian guests for trusting us to plan your vacation and hunt in South Africa.