Tim and Teri return for their 2nd hunting safari, hunt a cape buffalo

My first hunt with Karoo Will last year in August completely surpassed my expectations. So, I was tremendously looking forward to my second hunt.... 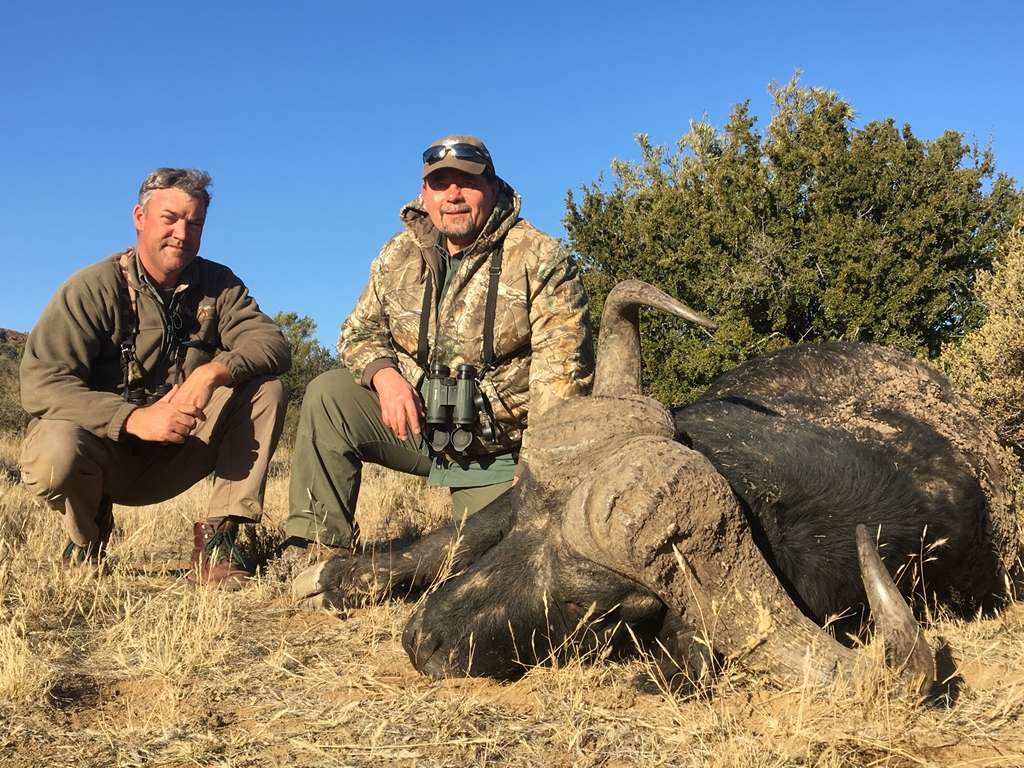 I had hunted plains game previously and still wanted to hunt nyala as I hadn’t taken the chance with on my first hunt. Again, my second hunt was beyond belief. Victor and Lindsey met us at the airport and for my wife, Teri, and I it was like being with friends that you haven’t seen in a year.  We had a great first night catching up on each other’s family and, as usual, Lindsey wowed us with an off the chart dinner. Victor and I had been communicating for some time about what I was hoping for and he had a great plan put together. We would hunt in this area for the nyala and then while the ladies had a girl’s trip to Port Elizabeth, he and I would head north to Free State for buffalo.

The next morning, we hunted Victor’s property and saw several nice nyala before deciding which best one to take. I must mention that Victor and Lindsey have an excellent property. Their lodge and chalets are extremely comfortable and spacious. If they didn’t hunt, they could open a 5-star restaurant as the delicious and wholesome meals that were prepared were outstanding. Which by the way, were served with fantastic South African wine. The great conversation and laughing made it feel truly like being at home. For those considering a hunt in South Africa, this is the place for you. Karoo Wild’s goal is to offer each of their guest’s a very rewarding and specialized experience. Their attention to detail and thoughtfulness in making sure their guests are not only comfortable but at home cannot be compared with. To add to this, Victor’s skills as a professional hunter are outstanding. He does his research and scouting to ensure that every hunter will find the trip rewarding.

On the drive to Free State, everything about the trip was jaw dropping. I knew hunting buffalo as compared to my previous plain games hunt was going to be different. Was it ever. We hunted and scouted the area on the first afternoon and got a very good idea on where to be and when for the following morning. The next day, Victor and (Can’t remember…Melvin??) found several herds but not what we were looking for. In the afternoon, a herd of 19 were spotted with several large bulls. We stalked and got as close as possible with the intent that the bulls would come out of the large thicket that they had bedded in. As the sun got lower, we crept in to attempt to entice them to move to the point of taking off our shoes to not make any undue noise. Unfortunately, they weren’t coming out that night. The next day, was perfect. Beautiful blue sky and clean crisp air. We came upon a herd coming over a small rise that had an amazing bull with them. Unfortunately, I didn’t take the shot, largely due to my inexperience but also it didn’t feel right. I have to say that Victor is the type of person that will tell you whether to take a shot or not. His eye for evaluating game cannot be surpassed. Not to be discouraged, we continued on though and we were able to find 3 bulls resting in a thicket that we overlooked from a hill. While waiting on them to move, a larger 4th bull walked in front of them. I was able to take a buffalo that surpassed my expectations. I can’t begin to describe this experience with the justice that it deserves. My adrenalin was definitely at new levels. Victor and his team went well above and beyond what would be expected to make sure my hunt, or any hunter, was a success. Truly, there isn’t a day that goes by where I don’t think of the adventure.

We returned to the main lodge that night and the next morning talked about what else that I might be interested in. I had been wanting a bushbuck but they are very elusive creatures. Teri also wanted me to get another zebra. Victor, again, knew the perfect place. We were able to stalk a bushbuck to within yards but decided that it was better left to continue improving the population. I was fortunate in that I was able to take a wonderful zebra which was completely due to Victor’s skills as a professional hunter.

I cannot wait to come back! There’s no other place than Karoo Wild Safari’s that can cater to its guest’s needs and offer them the relaxing and welcome feeling. I hope to write next year about my third hunt!