We were excited to welcome William and Sinead from Northern Ireland. This was their first trip to Africa. They were combining their hunt with a wine tour of Stellenbosch and some time in Cape Town. 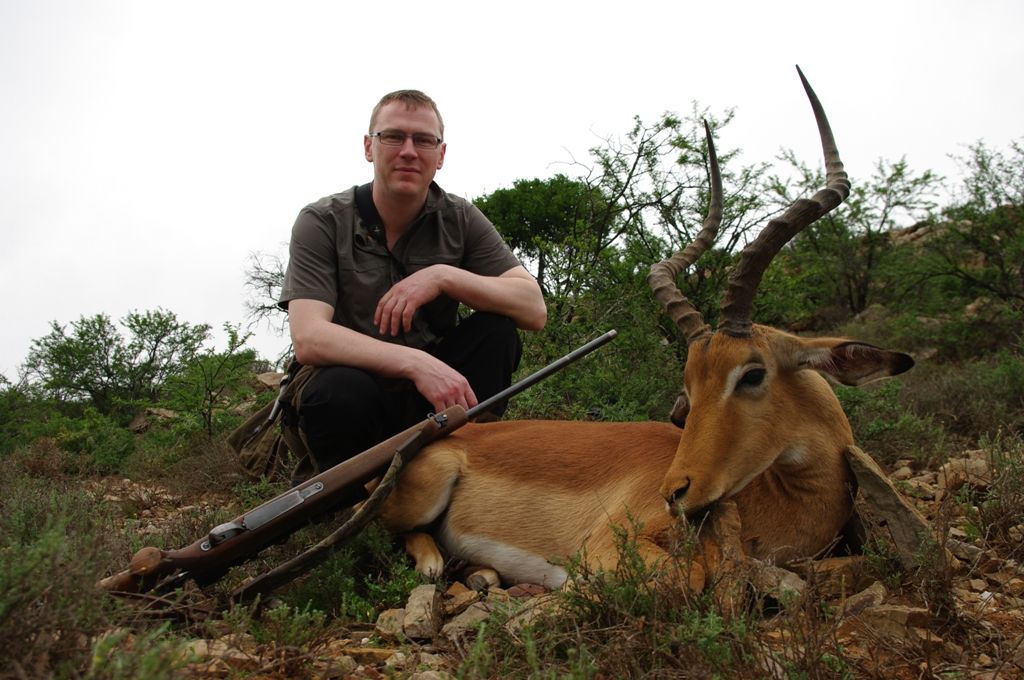 William chose to hunt with my Sako .270 with 130 gr Pro Am rounds. First thing that morning we were onto a herd of impala and a good stalk put us 80 yards downwind of the ram feeding directly ahead of us. He browsed into a clearing but the shot was obscured by some low bush and we decided to hold off for a better opportunity. We hunted for kudu that afternoon but saw no shooter bulls.

The next morning we hunted unsuccessfully for impala and that afternoon William and I made a long stalk on some springbok using a dry river bed as cover. With Sinead and Mitchell holding back behind us we got within 50 yards from the springbok ram who was lying down now behind some bush making a shot impossible. With springbok obscured all around us we decided to bide our time patiently waiting for him to rise. When he did, the shot was still partially blocked by tiny clumps of bush but William took his chance. The round hit bush first and tumbled into the buck which ran across the opposite slope. William followed up his shot with a long shot which downed the springbok in his tracks. What a magnificent stalk and trophy.

William was finally rewarded with an impala ram the next day. We spotted him sunning himself above the bush line and after a short stalk William made a great shot to bag his impala. We rode our luck that afternoon when we found ourselves below a bachelor herd of 7 trophy kudu bulls. They were making their way down the valley across from our position. The chosen bull, a big wide horned kudu, paused behin some bush and with a little of his shoulder exposed William made an attempt. The round whacked into the thicket behind him and the bush exploded as more unseen kudu burst into view. A bull paused long enough to give William the chance he needed and the bullet found it's mark this time and he crashed down into the valley below. After some pictures it was hard graft as William, Mitchell and I hauled that bull inch by inch down the valley to the pick-up. It was tough going but it felt good to get the job done.

The next day we visited Addo Elephant National Park where we were blessed to see large herds of cape buffalo and elephant. After lunch William and Sinead visited Daniel Wildcat World.

We took a day trip to the Camdeboo the next day in search of warthog. We saw several white rhino and elephant during our hunt but the warthog were scarce. Finally we spotted several warthog grazing down a slope and we hiked closer. We waited patiently for a large long tusked sow to come into view. It took all of our resilience to ignore the absolute beast of a kudu bull that tempted us during our wait but we remained focused on the warthog. William's bullet again found it's mark. After a splendid day in the bush we returned to the lodge.

William and Sinead left early the next morning for their trip to the Western Cape. They were good times and we had some good laughs. Hope to see you again soon!