A Cape Buffalo hunt is the most exciting of African hunts but one to be approached with caution and careful planning. 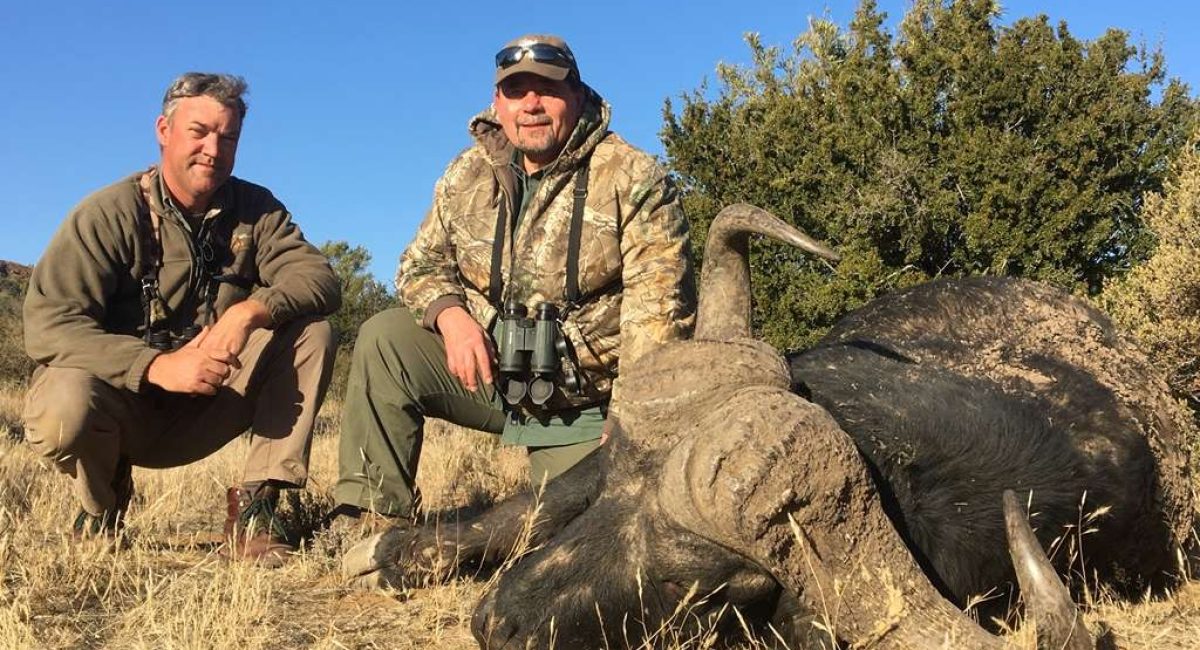 Found throughout southern Africa, Cape Buffalo are well adapted mixed feeders. They prefer the cover of bush during the warmer parts of the days. In the early morning and late afternoon, they’ll graze in the more open areas.

What is considered a Trophy Cape Buffalo?

Both sexes carry horns. Trophy cape buffalo bulls have thick bosses above their forehead and generally the spread of their horns are wider. Bosses turn hard from 7 years of age.

This is always the first criteria to consider when hunting a trophy buffalo. The slip dividing their horns between the bosses should be hard to the touch.

“Dagga boys” as old buffalo bulls are referred to in African hunting terms, develop a skin condition when they lose hair on their back and rump. “Dagga” means mud in English and refers to the mud that old buffalo bulls roll in to protect these bare patches of skin from the sun.

A cape buffalo hunt in South Africa requires caution and planning. Cape buffalo are regarded as one of the most dangerous of Africa’s Big Five and responsible for the highest number of deaths among professional hunters and also referred to as the "Black Death".

Unprovoked charges are common. Unlike the elephant that will often mock charge with ears flapping, a buffalo charge is a thing of conviction that needs to be stopped dead in its tracks. Hunt cape buffalo with an experienced PH only. There should be no egos on a cape buffalo hunt. Those that hunt them regularly have learned to stay humble and respectful of this dangerous beast.

Buffalo hunting in South Africa is often done by tracking spoor. Spot and stalk is possible if the terrain allows for it. Hunting cape buffalo is highly addictive and your first buffalo hunt probably won’t be your last!

A minimum caliber of .375 is legally required when hunting dangerous game in Africa. Past buffalo hunters would load a soft point as their first bullet and have solids in the magazine for follow up shots. Modern bullets however are far more robust, and well bonded soft points or monolithic bullets will suffice on their own.

Professional hunters prefer larger calibers like .416 Rigby when backing up a client on a buffalo hunt.

How much does it cost to hunt Cape Buffalo?